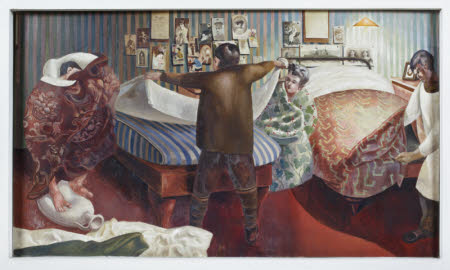 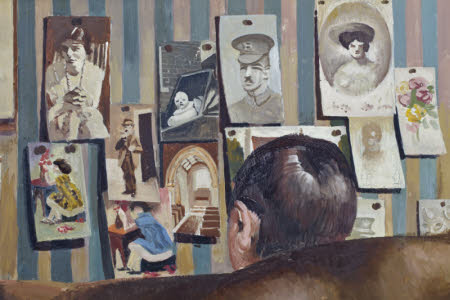 The artist Sir Stanley Spencer (1891–1959) had an unflinching eye for capturing everyday detail and instilling it with meaning. His commission for Sandham Memorial Chapel, one of the greatest painted schemes of 20th-century British art, is utterly remarkable. Spencer served in the First World War as a medical orderly outside Bristol, and then on the Macedonian front, and later drew on his experiences to create this masterpiece. The paintings were commissioned by John Louis Behrend (1881–1972) and his wife Mary (1884–1977) as a memorial to Mary’s brother Henry ‘Hal’ Sandham (1876–1920), who had also served in Macedonia and died of an illness after the war. Many of the paintings depict ordinary scenes, such as hospital interiors, the wounded arriving by bus, an inspection of kit, and tasks such as cleaning, preparing food, sorting laundry and filling tea urns. One painting, Map Reading, depicts an officer on horseback consulting a map with Macedonian place names while soldiers pick berries. The simplicity and banal nature of these subjects, showing both military personnel and civilians, provided a type of antidote to the remembered horrors of war. The chapel was given to the Trust in 1947 by the original patrons.

Oil painting on canvas, Bedmaking by Sir Stanley Spencer, CBE, RA (Cookham 1891– Cliveden 1959), 1927/32, South Wall, Sandham Memorial Chapel, Burghclere. Orderlies make soldiers’ beds in a hospital ward decorated with blue-and-white-striped wallpaper, the figure on the right making ‘hospital corners’. It has been suggested that the location was a requisitioned house in Salonika, but it is more likely to be a fusion of memories of the Beaufort Hospital and Macedonia, where Spencer had been a patient himself. Reluctant to give up their warm beds, two soldiers cocoon themselves in patterned blankets, one tiptoeing on a hot water bottle at left. Postcards and photographs of loved ones are pinned up on the walls, including portraits of Spencer’s first wife Hilda, his father William at the doorway of Hedsor Church, Cookham, and an image of his niece Pam as a baby, Further images were inspired by the collection of Spencer’s maid at Burghclere, Elsie Munday. See NT 719808 for an associated preparatory sketch.