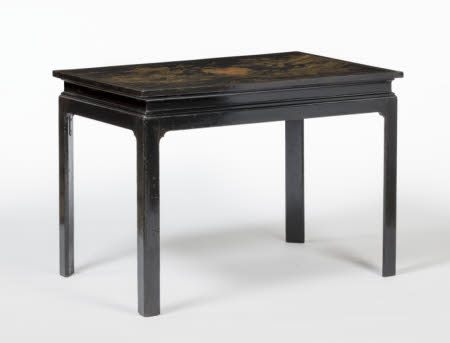 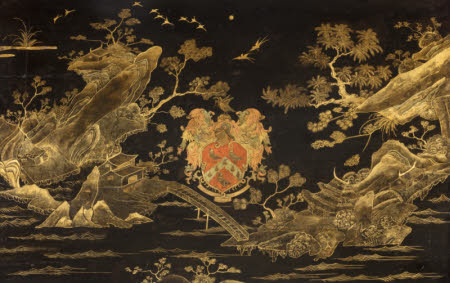 A lacquered table-top, Chinese Export, probably Guangzhou (Canton), circa 1715-20, the base japanned, English, circa 1715-30. The property of the Earldom of Jersey Trust. Part of a larger group of sixteen pieces of armorial Chinese Export furniture at Osterley, comprising ten hall chairs [NT 771891.1.1-.6 owned by the National Trust; NT 773356.1-..4 the property of the Earldom of Jersey Trust]; a screen [NT 771891.2]; a dressing or toilet box [NT 771891.3], a single chest on later stand [NT 771891.4] and a pair of chests on later stands [NT 771891.5.1 & .5.2]. The top of black lacquer atop substrate and softwood. Centred by the coat of arms granted to Sir Francis Child (1642-1713) in 1700, 'gules, a chevron engrailed ermine between three eagles close each gorged with a ducal coronet or', before a foliate mantling, and topped by the crest of Child, 'on a Rock proper an eagle rising argent holding in the beak an adder proper', on a torse. Surrounded by a landscape of mountainous islands with scattered trees. One island with a pavilion and a bridge. The whole with areas of loss and overpainting. The original border - of repeated splayed elongated leaves forming chevrons, between the leaves a delicate stalk or sprig of stylised foliage, all within gold lines - largely obscured. The base of japanned oak and softwood, and with sunken frieze. The legs with moulded outer corners and chamfered on the inside. Small 'peaked' spandrels between the legs and the frieze. Later metal braces to the table's frame.

Almost certainly acquired by the Child family of Osterley and London between 1715 and 1720. Thence by descent, and on loan to the National Trust from the Earldom of Jersey Trust.

Underside of top: The Earl of Jersey