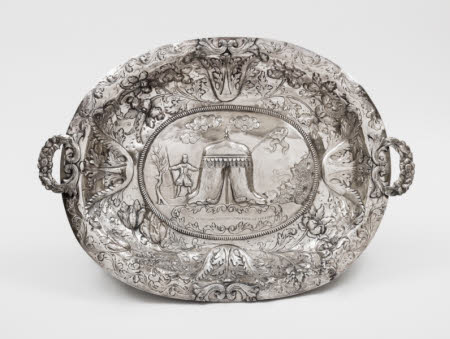 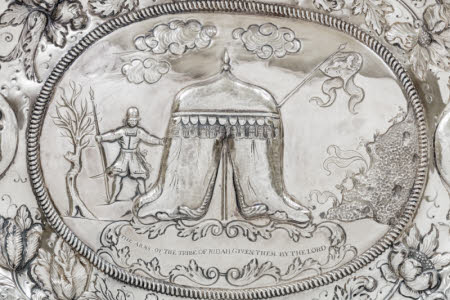 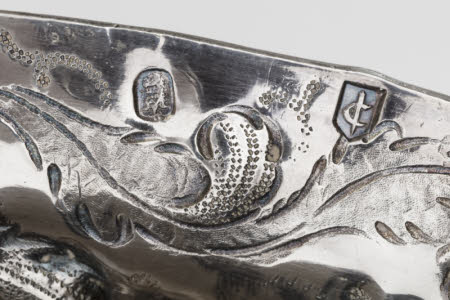 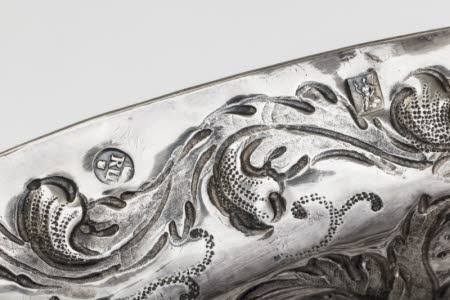 A raised oval dish on four ball feet and with two handles (originally four) in Britannia silver made by John Ruslen (fl. 1664-1716) and presented to Sir Francis Child the Elder (1642-1713) during his term as Lord Mayor of London in 1698-9 by the Sephardi community of Spanish and Portuguese Jews. The sides and rim of the dish are chased in high relief with Dutch-style foliate and floral decoration and the base is in the form of an oval medallion containing a chased scene of a soldier holding a spear and standing by a tent with clouds above and a tree and a hill to either side. Above the tent, and protruding from it, is a pennant on which is a lion rampant, whilst below, in a foliate cartouche, is an engraved motto, ‘The arms of the Tribe of Judah given them by the Lord’. This scene is derived from the badge of the Spanish and Portuguese Jews in London who gave silver dishes, and later salvers and covered cups, to successive lord mayors from 1678 until 1780.

Front, engraved legend: THE ARMS OF THE TRIBE OF JUDAH GIVEN THEM BY THE LORD Front, on upper part of rim, stamped marks: ‘RU’ with a crown above and a shield below in an oval punch for John Ruslen (fl. 1664-1716, d. 1717); Britannia [indicating Britannia standard silver]; lion’s head erased [indicating London assay office]; date letter ‘C’ [indicating 1698/9].