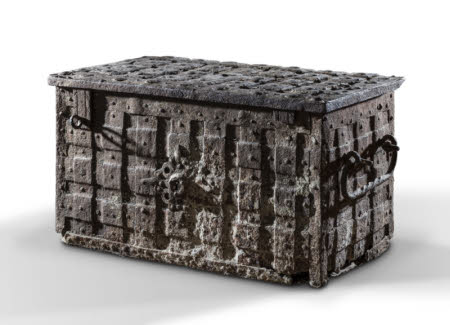 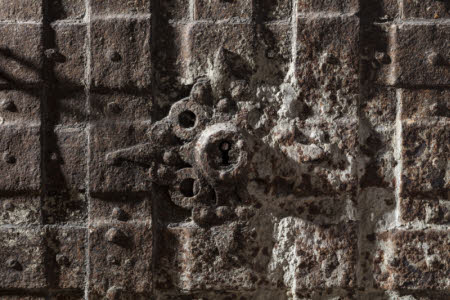 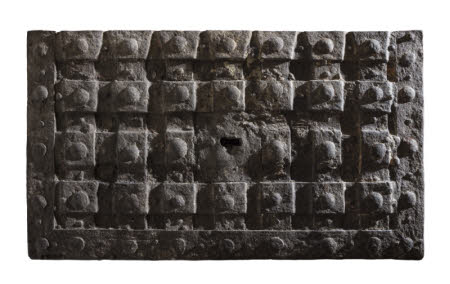 An iron strong box, German/Dutch, mid- to late 17th century. Of sheet iron, applied all-over the exterior with interwoven iron bands fixed by dome-headed rivets. The ends with articulated bale handles with wrythen centres. The front with a false keyhole and foliate lozenge-shaped escutcheon, and a pair of hasps (one with losses) for padlocks. The keyhole proper in the centre of the lid. The lock mechanism once fixed to the underside of the lid now lacking. No interior till.

Chests - or strong boxes - like this of sheet and strap iron, fitted with handles for portability, were imported into England in large numbers in the sixteenth and seventeenth centuries: many survive today on Continental Europe and in Britain. An early form of safe, they were the only way to secure valuable goods in an age before paper money, when wealth resided mainly in heavy metal coinage, plate and jewels. Some examples survive painted in colours with leaves and flowers, sometimes figures and, very occasionally, a date. See, for instance, NT 997992, a strong box at Sizergh, painted with flowers and the date '1623'. All of these strong boxes are fitted with a lock to the underside of the lid, shooting bolts – sometimes as many as twelve – engaging with the rebate or lip in the lid’s edge. Almost always, a plate of sheet metal – the lockplate – is fitted over the lock mechanism, hiding it and its many movable parts from view. Buyers seem to have been able to purchase different grades of chest, the best being painted, highly decorative examples almost always with a beautifully engraved lockplate and an interior till. More utilitarian examples were probably unpainted and fitted with plainer lockplates. It is hard to be sure, because this strong box at Osterley is heavily corroded, but it seems to fall into the latter category, which supports the view that it was used as part of a commercial operation and could, therefore, have been used to store money and goods deposited in Child’s bank. An engraving of the Bank of England, founded in 1694, shows a very similar chest in use before a counter. In 1691, when Francis Child was accused in Chancery of having stolen jewels belonging to Nell Gwyn, Charles II’s mistress, after her death in 1687, his answer recorded that her jewels – including ‘A jewell sett with one and twenty diamonds A paire of pendants with six diamonds one great Necklace and one lesser necklace of pearle’ – given as security against loans which she had never repaid, were stored ‘locked up in a strong box’ which may have been very like this chest which survives at Osterley.[1] Possibly the 'large Dutch Iron Chest' in the Pantry at Osterley in 1782. Megan Wheeler, October 2019 [1] National Archives, C 8/423/57. [2] M. Tomlin, 'The 1782 Inventory of Osterley Park' in Furniture History XXII (1986), p. 123.

Possibly the 'large Dutch Iron Chest' listed in the Pantry in the inventory taken at Osterley in 1782. By descent to George Francis Child-Villiers, 9th Earl of Jersey (1910 – 1998); given to the National Trust in 1981.