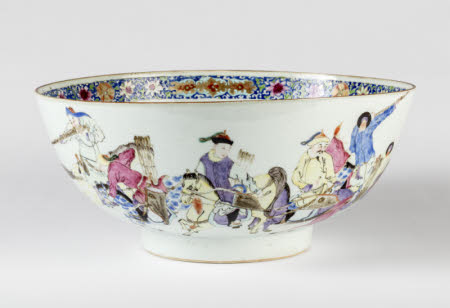 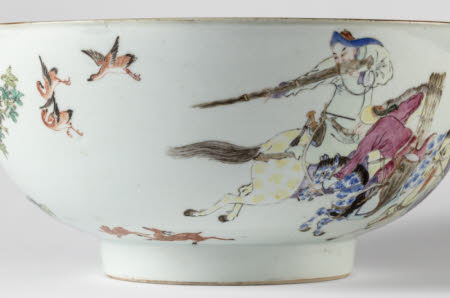 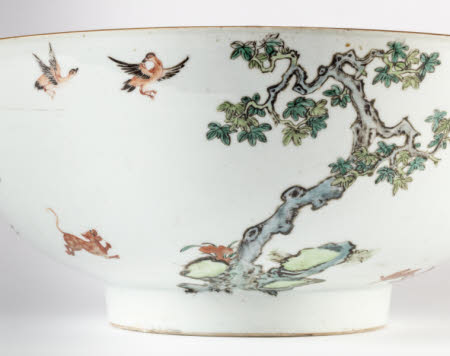 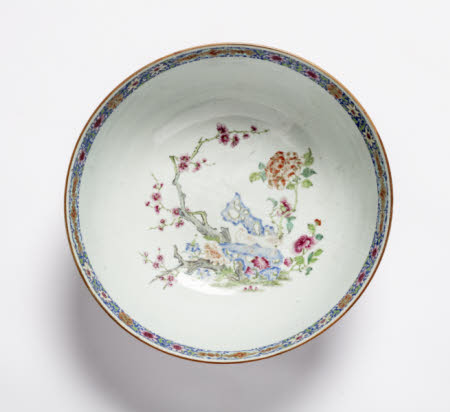 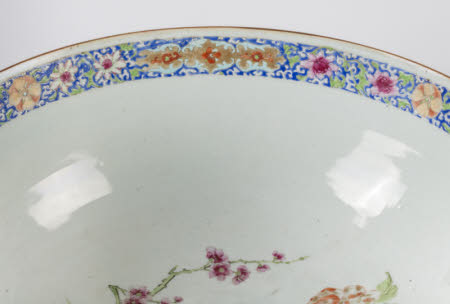 Punch bowl, porcelain, painted around the exterior in 'famille rose' enamels with a hunting scene, the male figures in Manchu dress are mounted on horses carrying bows and arrows, one appears to hold a matchlock, perhaps with a bayonet, they are chasing deer and a leopard, the interior is painted with a scholar's rock and peony motif and there is an ornamental band at the rim, China, Jingdezhen, painted in Guangzhou (Canton), circa 1740.

The subject depicted on this punch bowl is very unusual. The hunting scene includes Manchu courtiers in traditional hunting garb, practicing archery and riding, skills promoted by the Kangxi, Yongzheng and Qianlong emperors to idealize and promote Manchu nomadic culture. The subject matter would have also appealed to the English gentry who had a love of hunting and would have been fascinated by the Chinese costumes and their skills. It is painted in the so-called 'famille rose' enamel palette of overglaze pigments, which included pink, created from minute amounts of colloidal gold and became opaque on firing when tin was added to the ingredients. European enamellers on metal had used opaque enamels and the pink colour since the later 17th century. It was introduced to the Chinese around 1720. The effect was dramatic, almost immediately it replaced the limited palette of translucent colours, today described as 'famille verte' or green family. Chinese porcelain painters could then paint with subtle shadows and depict volume and shade. This new enamel style is known in China as 'fencai' (‘powdered colours’) or 'yangcai' (‘foreign colours’). Patricia Ferguson, 2019