Mr and Mrs Glazebrook and their Three Children at Monk's House 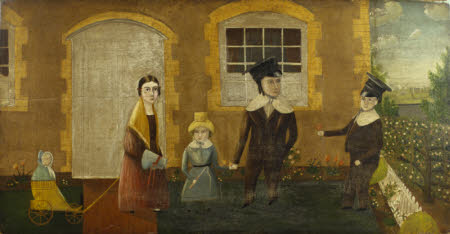 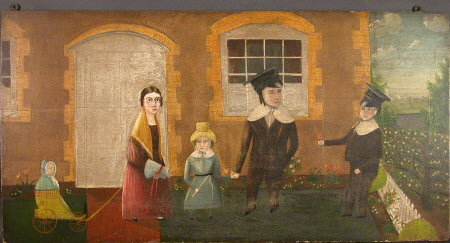 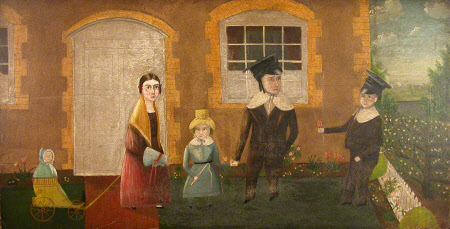 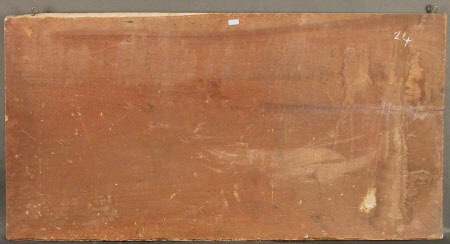 Oil painting on panel, The Glazebrook Family Children at Monk's House by British (English) School. circa 1830/50. Four full-length portraits of children one with a pram with a doll, All are standing in front of Monk's House with a landscape view with a distant horizon on the right. The Glazebrook family owned Glazebrooks (now Monk's Hall) from 1769-1877. 33 years in the hands of John Glazebrook, and 48 years in those of his widow Mercy Glazebrook, and his son William Glazebrook. In fact they had lived in the house for some 30 years before actually acquiring it. The Glazebrooks were millers and John Glazebrook bought the mill which was up on the down above Rodmell, and it remained in the family for 128 years when it was sold by his son William Glazebrook in 1877. This painting among the contents of Monk's Hall was put up for auction in 1919 and was bought by Leonard Woolf together with two others. In his autobiography he describes it as 'four children heavily swaddled in hats and coats standing stiffly in a line in front of the house. They were, I am sure, the Glazebrook children of a hundred years ago'. Leonard Woolf, 'An Autobiography Vol.2 1911-1969' , pp.193-196.