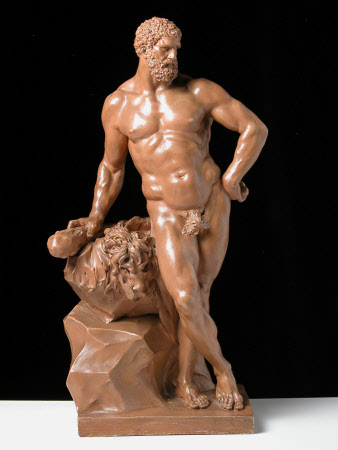 Painted terracotta, modelled from clay, sculpture, Hercules by John Michael Rysbrack (Antwerp 1694 – London 1770), signed Mich. Rysbrack 1744. A full-length statuette (not a mere bozzetto) of Hercules, with crossed legs leaning against rocks on which are the lion skin and club, head turned to left, left hand on hip. He is resting after his eleventh labour and holds the apples of the Heperides in his left hand. It is inspired by the Farnese Hercules but was modelled on 'the various parts and limbs of seven or eight of the strongest and best made men in London, chiefly the bruisers or boxers of the then flourishing amphitheatre of boxing'. The patina contributes to the appeareance of bronze but may not be contemporary with the artist. Left to Henry Hoare in Rysbrack's will, who had ordered a marble version more than life-size for his Temple of Hercules (Pantheon) (1747), built by Henry Flitcroft in 1753/4 in the gardens at Stourhead, three years later but which took the sculptor several years to complete (1756) and was admired by George Vertue, Horace Walpole and others contemporaries.