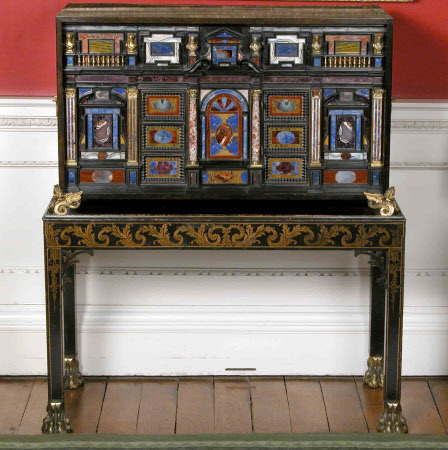 An ebony, rosewood, pietre dure and ormolu mounted cabinet, Roman, mid 17th century. The cabinet centred by a central cupboard door surrounded by an arrangement of variously sized drawers incorporating marble columns, balustrade galleries and mounted ormolu busts of Roman Emperors, raised on winged putti cast feet and with cast ormolu handles to the sides. The drawer fronts and cupboard door applied with lapis lazuli, jaspers, marbles and agates. Some of the ormolu mounts have probably been replaced or re-gilded.

This cabinet forms part of a group of Roman 17th century pietra dura inlaid cabinets which combine semi precious stone, marbles, agates and ormolu, often laid on an ebony ground. Archaeological discoveries in the 16th century fired an enthusiasm for all things Antique. Rome became a magnet for discerning collectors and antique marbles began to be employed on works of art throughout Italy. The desire to emulate the art of Ancient Rome was strong and the cabinet makers masters of their craft. There were large numbers of skilled craftsmen in 17th century Rome, many of whom were Lombard in origin, although the attribution to specific makers for these cabinets still remains difficult. The Roman taste in pietre dure inlaid works differed from that which was predominant in Florence and other centres in Italy in that it was dominated by abstract geometrical compositions in transparent stones such as jasper, rather than naturalistic or figurative motifs such as flowers and birds with the intrinsic decoration being in the natural decorative effect of the stone itself. There is another similar example (NT731578) at Stourhead, both cabinets were brought from York Street, St. James Square, under the will of Sir Henry Hugh Hoare, Bart. Left as an heirloom, 'To go to the several persons to whom my estates in the counties of Bucks and Beds are devised, subject nevertheless to the necessary wear and tear of perishable articles.' Will dated 27th April 1839. For further discussion on Italian pietre dure cabinets see: Jervis, Simon & Dodd, Dudley ‘Roman spendour, English arcadia : the English taste for pietre dure and the Sixtus cabinet at Stourhead’ London : Philip Wilson Publishers, [2015] Giusti, Anna Maria , 'Pietre Dure', London, 1992 González-Palacios, Alvar 'Il Tempio del Gusto, Roma e il Regno delle Due Sicilie' Vol. II, Milan 1984 James Weedon (January 2018)

Brought from York Street, St. James Square. Under the will of Sir Henry Hugh Hoare, 3rd Bt (1762-1841) dated 27th April 1839 left as an heirloom 'To go to the several persons to whom my estates in the counties of Bucks and Beds are devised, subject nevertheless to the necessary wear and tear of perishable articles.' Given to the National Trust along with Stourhead House, its grounds, and the rest of the contents by Sir Henry Hugh Arthur Hoare, 6th Bt (1865 – 1947) in 1946.