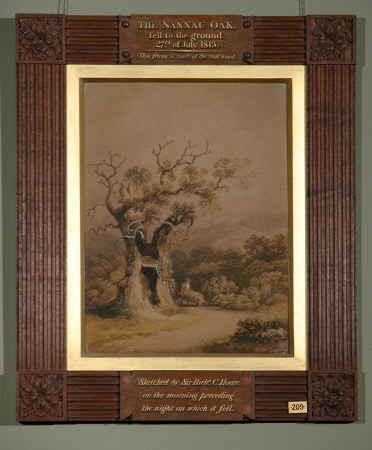 Watercolour on paper, The Nannau Oak by Sir Richard Colt Hoare, 2nd Bt (1758-1838), 27 July 1813. Inscribed on front of frame made of wood from the Nannau Oak : 'The Nannau Oak fell to the ground 27 July 1813. This frame is made of the real wood and on a little wooden label in gold: Sketched by Sr Richd. C. Hoare on the morning preceding the night on which it fell'. The famous tree (Derwen Ceubren yr Ellyll: 'the hollow oak of the demon') in Merionethshire (now Gwynedd) was associated with Welsh mythology. This famous oak tree stood in the grounds of Sir Robert Williams Vaughan's house in Cardiganshire, and according to tradition contained within its trunk the body of a Welsh chieftain, Howard Sele, who had been immured there by order of Owen Glendower (Owain Glyndwr).

Verso: Framers label: Smith, Picture frame Maker, by Appointment. to his Majesty the King...&c Verso: Inscribed in pencil on verso: MIIB and 17/11 ?