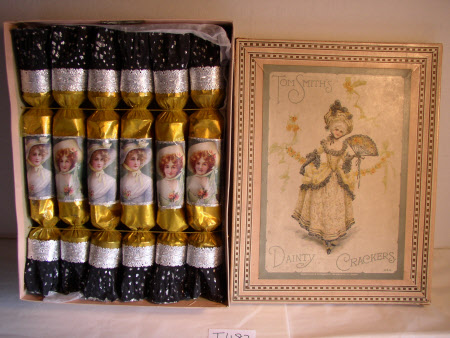 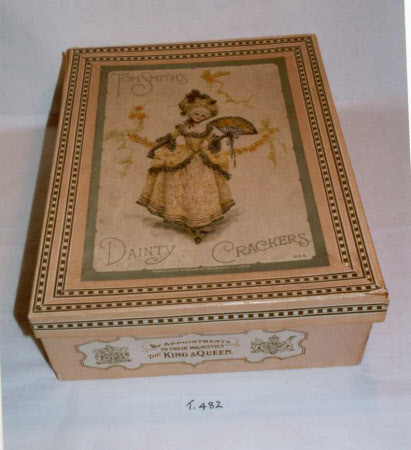 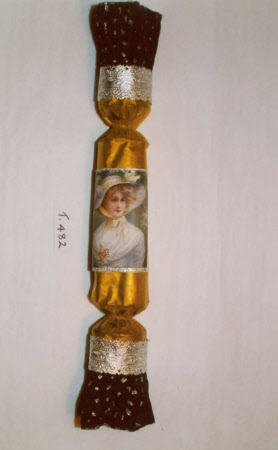 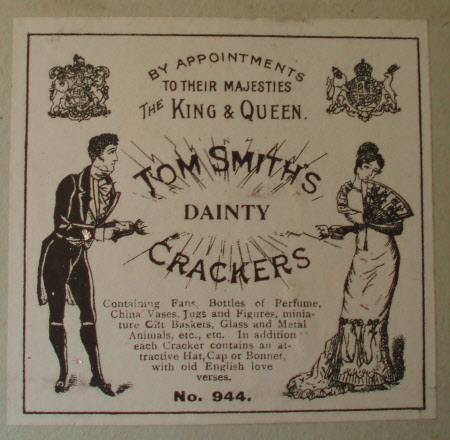 A box of crackers made by the famous Tom Smith's company, probably in about 1910, but none of them have ever been pulled!

An original cardboard box containing twelve Tom Smith's Christmas crackers (complete set) possibly dating from between 1901 to 1910 in the reign of Edward VII and Queen Alexandra. Inside the box are twelve paper crackers lying in two layers of six. They are held in place with a piece of yellow string which runs over the top and bottom on the top layer. The centre of each is covered with a gold coloured, fine ribbed paper, over which is a fine clear, yellow, paper film. Each cracker has a printed colour illustration showing the head and shoulders of a woman in 18th century dress. There are only two women depicted throughout. The ends of each cracker have a band of silver coloured doily type paper, followed by black crepe paper which has blobs of silver paint over the surface. The yellow film has cracked in places and the silver and paint is flaking off. The crackers are held in place by lengths of gold-coloured thread. The original box is made from cardboard and is rectangular in shape with a separate shallow lid. The lid is pink on the outside and stuck on the top is a large rectangular colour illustration of a woman wearing 18th century style dress and holding a fan. Above the illustration are the words 'Tom Smith's' and below are the words 'Dainty Crackers 944 Manufactured In England By Tom Smith And Co. Ltd. London'. Around the illustration are two decorative borders made up of brown and white squares. There is also a border with the same design on the side of the lid. The inside of the box is white and has a small white printed label which shows a black and white illustration of the 'King and Queen' in what appears to be Edwardian dress (possibly Edward VII and Queen Alexandra). Above and in between the illustrations are the words 'By Appointment To Their Majesties The King And Queen, Tom Smith Dainty Crackers'. There is a description which explains what the crackers contain, e.g. fans, bottles of perfume, vases etc. On the two long sides of the box are white illustrations of cherubs in between which are the words 'Tom Smith's Xmas Crackers'. On the two shorter sides is an illustration of a white shield inside which are two crests and the words 'By Appointment To Their Majesties The King And Queen'. Total number of items is 14.

Donated to the Museum of Childhood by Mrs D.M. Abblett in July 1980.