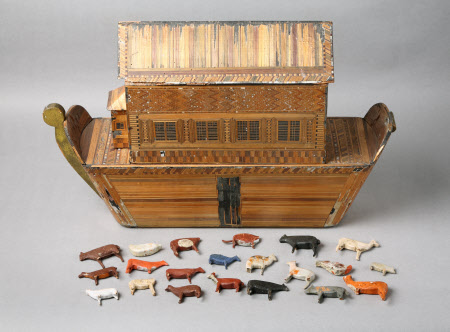 This beautiful wooden ark has a straw marquetry roof. The top of the house lifts off to reveal 20 painted wooden animals which unfortunately are all slightly damaged. In the past, Noah’s Arks were seen as ‘Sunday’ toys because of their religious associations, and it was only on this day of the week that children were allowed to play with them. Our model ark was made by French prisoners-of-war at Norman Cross House in Peterborough, the world’s first purpose-built prisoner-of-war camp and commissioned by the Royal Navy during the Napoleonic Wars. The prison housed around 5,500 men and it was the Navy’s mission to carry out humane treatment and look after the men well. They received clothing, sufficient amounts of food and were given the opportunity to learn to read and write. The prisoners were encouraged to relieve their boredom by making toys, model ships, games and ornaments from wood, bone and straw marquetry, which they were allowed to sell at the market by the prison gates.

Wooden ark covered with marquetry made from raffia and straw. House top lifts off to reveal painted wooden animals (20, all broken) in base. Made by French prisoners of war at Norman Cross House, Peterborough during Napoleonic Wars.