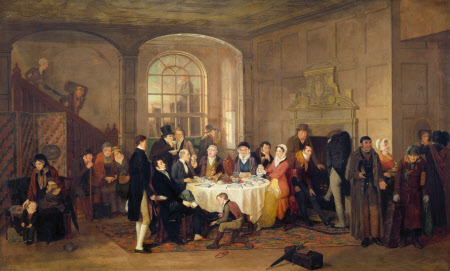 This is the artist's most important painting. In it he portrays many well-known writers, including William Wordsworth and Samuel Taylor Coleridge, who hands Wordsworth a boiled egg. This presumably imaginary scene in a coaching inn is designed to show off the association of such famous writers with the family of Sir Charles Abraham Elton of Clevedon Court, himself a gifted writer. Sir Charles's daughter, Julia Elizabeth can be seen pouring out the tea.