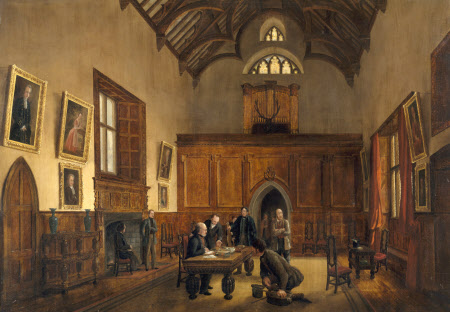 Creativity runs in the Elton family. Mr Edmund Elton showed his artistic skills in this painting, which shows how he thought the great hall might have looked before the 18th century plaster ceiling was installed.

Oil painting on canvas, 'Trying a Poacher' by Edmund William Elton (1822-1859), circa 1850. It depicts members of the Elton family and servants, with Sir Charles Abraham Elton, 6th Bt (1778-1853) the father of the artist, seated, centre, at a drawer table in the imaginary hammer-beamed Great Hall at Clevedon Court. Arched wooden door to the left, partial, shoulder-high wood panelling, plaster walls above, on which hang three pictures, a fireplace centre, which is below a window, on the other side of the fireplace is more wood panelling above which are two more paintings; at the far end a panelled screen, two panels on each side and one above a central arch, this is topped in the centre with a stag-head with a large pair of antlers and behind, below some high small windows at the far end of the hall, can be seen the pipes of an organ; on the right wall more panelling with paintings above, and a large window in the centre; door to the extreme right of painting. The room is furnished with a sideboard on the left with blue vases a drawer-table with bulbous legs, centre, and a number of high-backed Jacobean chairs. There are eight figures in the room, Sir Charles, seated left, is interrogating a poacher who kneels to the right of the table, while the gamekeepers display the game they have found in his basket.The artist Edmund William Elton has included himself standing by the fireplace, beside a man seated on his right. He has also exercised considerable license in the architecture by removing the plaster ceiling and substituting a 14th century roof, pulled out generations earlier. Most of the paintings and furniture shown in the painting are still in Clevedon Court.

Clevedon Court [The National Trust] revised 1972, 1974, 1977, 1979, p.25: "The Great Hall...Nearby hangs the picture of the Great Hall by Edmund Elton showing what the effect would be if the ceiling were removed and the room open to the rafters. Seated at the drawer table, Sir Charles Abraham Elton, 6th Baronet, is interrogating a poacher while the gamekeepers display the game they have found in his basket. The artist has included himself standing by the fireplace. The pictures and most of the furniture showin the Hall are still present."