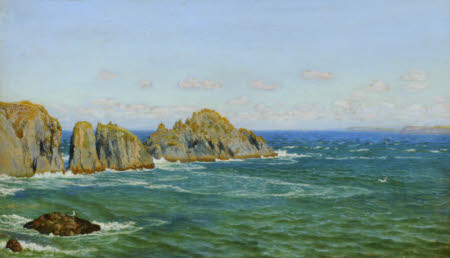 Oil painting on board, A Rocky Coast, Merope Rocks, near Harlyn Bay, North Cornwall by Arthur Hughes (London 1832 - Kew 1915), signed, lower right: 'ARTHUR HUGHES', 1889/1892. A rocky promontory extending into the sea from left. The artist wrote, from Kew Green, to Alice Boyd, 28th August 1895 (Fredeman 1967, p. 66): "I have lately sold three little Cornish landscapes rather romantically I think. " Long ago I used to visit dear friends, the Birbeck Hills, whose children then were small, but very great friends. These are now grown into men and women doing famously in the world, and now and then they, one or another, come to see me and buy a very small picture of Cornwall sketches I made a few years ago. But this last incident crowns all, for one, Liverpool solicitor, has such a grateful client that the said G. C. must needs make my young friend a present and wished it to be int he form of 60 pounds worth of Electro-Plate!, which so horrified them that by some menas they made Grateful one to know that they would like most of would be landscapes by AG!, and that 60 pounds is come to Kew in consequence."(Roberts 1997, p. 208).

Purchased, along with two others (other two are unidentified), for £60 in August 1895 by an unknown patron; gifted by him in 1895 to Sir (Arthur) Norman Hill; thence in 1944 to his daughter Beatrice; given to the National Trust in 1980/bequeathed by Beatrice Hill (d.1983)