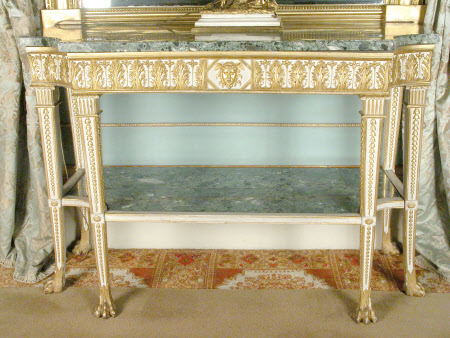 A pier table, breakfront and of two tiers, one of a pair, of white-painted and part water-gilded poplar or lime, probably made in Palermo, Sicily, circa 1808. The Verde antico marble top and shelf catalogued as NT 608163.2.2 and 2.3 respectively. The pair to this table catalogued as NT 608163.1. Having a frieze with concave corners, with gilded mouldings to the top and bottom edges, and centred by an applied mask of Mercury, flanked to either side by a run of gilt acanthus leaves. Raised on six square-section legs with a pronounced taper and topped by a fluted capital. The length of the legs applied with gilt husk pendants above gilt paw feet. Joined by rectangular-section stretchers and a shelf of Verde antico marble.

This table and its pair were once thought to have been made bespoke in England for Attingham Park's Drawing Room, but recent research by the National Trust's furniture curators has attributed them to Palermo, Sicily. As a consequence, they are now thought to have been probably acquired by William Noel-Hill, 3rd Baron Berwick (1773-1842) whilst he was on diplomatic service in Italy, Sicily and Sardinia. Whilst in Palermo in March 1808, preparing for the voyage to the exiled court of King Vittorio Emanuele I (1759-1824) and Queen Maria Teresa (1773-1832) in Sardinia, he complained that he had had to have every piece of furniture for his new embassy in Sardinia made to order. It is thought that these table were amongst the pieces he was forced to buy.

Probably 3rd Lord Berwick collection: William Noel-Hill, 3rd Baron Berwick (1773-1842). Probably acquired by the 3rd Lord Berwick, who had been in Italy as British envoy and ambassador to the Kingdom of Naples and the Two Sicilies. By descent bequeathed to the National Trust with the estate, house and contents of Attingham by Thomas Henry Noel-Hill, 8th Baron Berwick (1877-1947) on 15th May 1953.