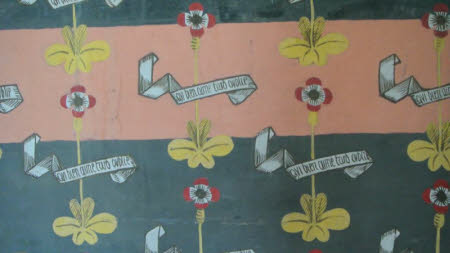 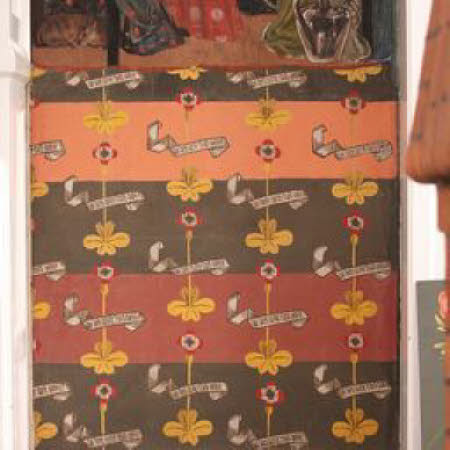 Floral decorative schemes have recently been revealed on the plaster walls above and below Burne-Jones's three wedding scenes on the South and East walls of the Drawing Room at Red House. They have been hidden for over a hundred years behind 19th-century wooden panelling that was added by a later owner of the house. It had been installed alongside the white painted wooden settle (NT 60136) that had been brought by William Morris from Red Lion Square in 1860 but was removed again in May 2013. The painted decorations are believed to be by Morris himself. On the lower register in a scroll are the words 'Qui bien aime tard oublie' from a common French proverb, often used on Valentine's Day. Basically it means: one never forgets true love. It was famously used by Chaucer whose poems proved to be a great inspiration for the Pre-Raphaelite artists. Morris also used the motto in an embroidered hanging, two of four panels of which now belong to the William Morris Gallery, Walthamstow.

Tempera on plaster, Qui bien aime tard oublie ('who loves well forgets slowly' or 'who loves best loves longest') Decoration by William Morris (Walthamstow 1834 - Hammersmith 1896), circa 1860/62. The french writing on the scroll of the decorative part of the mural is a common proverb and a quotation from Chaucer's 'Parlement of Foulyes' (Parliament of Fowls) (1382-3) (line 679) written as a Valentine's Day diversion. Morris's decoration comprises of horizontal bands of salmon-orange, warm blue-green with stylized poppy in ochre and claret red and a scroll bearing the motto. It relates to an embroidered hanging by Morris & Co. that was at Penkill Castle, Ayrshire until 1992, possibly exhibited at the 1862 International Exhibition and acquired by William Bell Scott for the owner Spencer Boyd and his sister Alice (Bell's mistress). The fabric was referred to as a 'Topsaic tapestry' (after Morris's nickname 'Topsy') by Rossetti after his visit there in 1868. Two of the four embroidered panels, more elaborate in design, including fruit trees, daisies and herons but with the same motto, now belong the William Morris Gallery, Walthamstow and one of which is on long-term loan to Red House. Above, on a second register are Burne-Jones's three wedding scenes, the third on the adjacent corner on the East wall (NT 60138, 60139, 60140) and on a third register is recently-uncovered (July 2013) floral painted decoration of a pink rose and stem against a dark green backdrop, again believed to be by Morris.