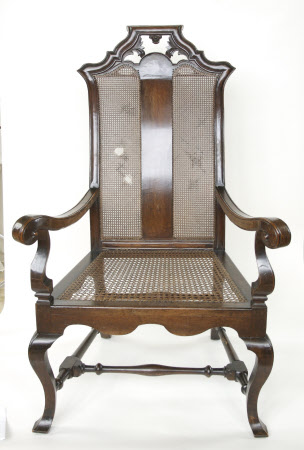 A walnut and cane open armchair, one of a set of six, English, circa 1715 - 1730. Having an 'India' back, with arched solid splat flanked to either side by a panel of cane. The splat tenoned into a cross-rail. All in a moulded frame with flared shoulders and scrolled toprail above pierced leaves and a flowerhead. The cane seat flanked by open arms with scroll terminals on angular scrolling arm supports. The seat rails arched and raised on angular cabriole front legs and block and column-turned raked rear legs. Joined by block and ball-turned side and central stretchers, and with a high rear stretcher. One of the set with journeyman's stamps 'MA' and 'IG' on a rear post. They are probably the stamps of the caner and the joiner. -- These chairs are thought to be part of the original furnishings of Montacute, and the only pieces of original furniture which survive at the house. The 'India' back was a radical departure for English chair-making, replacing the open space between the back and the seat with a fixed vertical board which was ergonomically-shaped to fit the sitter's back. It was a construction method derived directly from China and the contemporary name 'India back' acknowledged this [Bowett]. The earliest set of documented 'India back' chairs are at Canons Ashby, Northamptonshire, where they were recorded in the Right Hand Parlour in November 1717 [NT 494408.1 - .6, originally the set was of twelve chairs, together with a settee and a marble-topped sideboard table].

These chairs appear in a watercolour of the Great Hall by C. J. Richardson circa 1834; but were subsequently sold. Lent to the National Trust by Commander Harry Phelips (1877 - 1958). Purchased by the National Trust through the generosity of the Royal Oak Foundation and the help of a grant from the Purchase Grant Fund, it was restored to Montacute in October 1980.