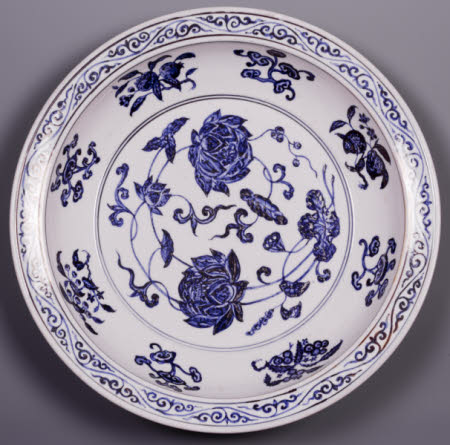 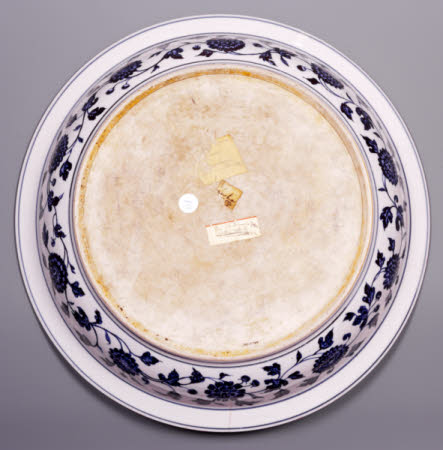 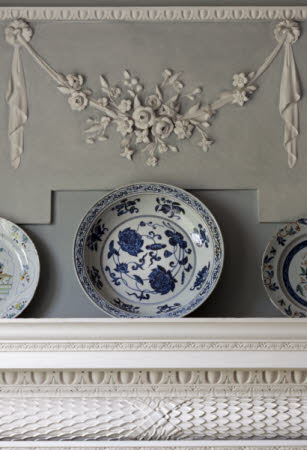 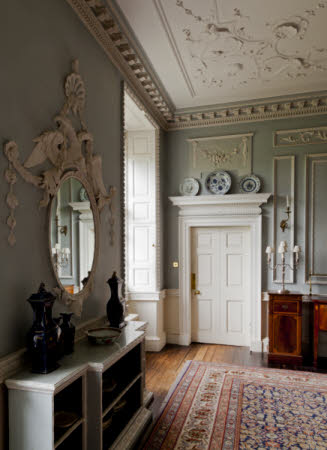 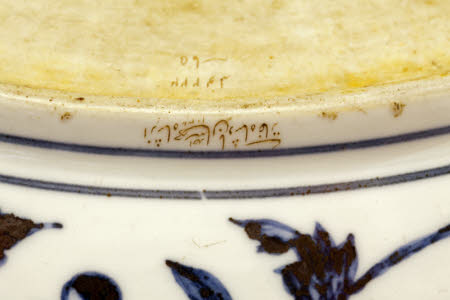 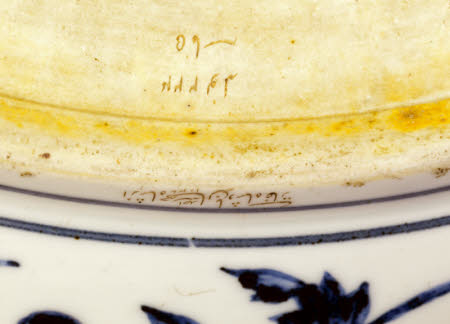 A large blue-painted dish, made in Jingdezhen around 1400-25. Decorated in the centre in underglaze blue and two stylised lotuses; the cavetto with Lingzhi (sacred fungus), peaches, pomegranates and cherries, and a border of scrolling leaves.

This Chinese Ming dynasty porcelain dish is exceptional among historic English collections. It was made around 1400–25, almost two centuries before Chinese porcelain began to be exported to England. A Persian inscription identifies it as part of the imperial Mughal treasury of Shah Jahan, a great patron of art and architecture who reigned from 1628 to 1658. Discovered amidst the treasures taken as spoils during India’s First War of Independence, in 1857, it was acquired by Sir Charles Edward Trevelyan, 1st Baronet (1807–86), of Wallington, a colonial administrator and father of the modern British civil service, when he was governor of Madras in 1859–60. The Delhi sultanate commissioned large dishes with broad, flat rims in the mid-fourteenth century for use in communal feasting, but the trade was discouraged under the first Ming emperor. Between 1405 and 1433, however, the Chinese diplomat Zheng He made numerous maritime expeditions to south and western Asia, and this dish may have been among his diplomatic gifts. Although the shape was foreign, the painted decoration is thoroughly Chinese, with lotus blossoms and scrolling aquatic plants (polygonum and sagittaria) in the centre, surrounded by stylised lingzhi (sacred mushrooms) alternating with fruiting loquat, peach, pomegranate and cherry branches, and a meandering chrysanthemum scroll band around the exterior. On the glazed footrim is a Persian inscription in nasta’liq script incised by a gem carver or seal engraver, probably Iranian, who were the most skilled in calligraphy. Around sixteen examples are known of Chinese porcelain with Mughal inscriptions, dating between 1612 and 1660. The seven examples associated with Shah Jahan are older than their inscriptions and are, therefore (if not inherited), evidence of his or a wider courtly taste for antique Chinese porcelain. Some were perhaps received as diplomatic gifts. The inscription reads ‘For/of Shah Jahan, “Warrior of the Faith”’ ('Az Shah Jahan Padshah Ghazi, sanna ahad’). Another inscription records its weight as 224 tola and 5 masha, possibly a method of record-keeping for inventory purposes, more commonly associated with precious metal. Similar Chinese porcelain dishes are seen displayed in the architectural details of a famous Mughal album painting of about 1610, which depicts an annual ceremony in which the future Shah Jahan was weighed against gold, silver and grain, later distributed to the poor. The dish has a paper label inscribed in ink ‘Lucknow / 1859’. Lucknow was the cosmopolitan Muslim capital of Awadh (Oudh), in Uttar Pradesh, north India. In 1856 the British annexed the kingdom, resulting in the First War of Independence, when the British sacked and looted the Qaisar Bagh Palace. Its treasury, formed by the nawabs of Awadh, included imperial Mughal manuscripts and paintings acquired when members of the imperial family moved to Faizabad and Lucknow following the sack of Delhi in 1739, or from later waves of cultural émigrés. The Wallington dish may have shared this provenance. In 1862, Sir Charles was joined in India by his son Sir George Otto Trevelyan, the future 2nd Baronet (1838–1928), author of Cawnpore (1865) and later Secretary for Scotland. When Sir George rearranged the large ceramic collection at Wallington, ‘a long and delightful labour of love’, he placed the rare Mughal heirloom above a door in the dining room (where it was photographed in 1918). It commemorates the lives lost in the horrific massacre at Cawnpore during the First War of Independence. Catalogue entry adapted from Patricia F. Ferguson, Ceramics: 400 Years of British Collecting in 100 Masterpieces, Philip Wilson Publishers, 2016.