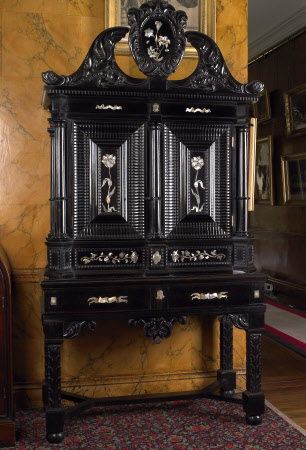 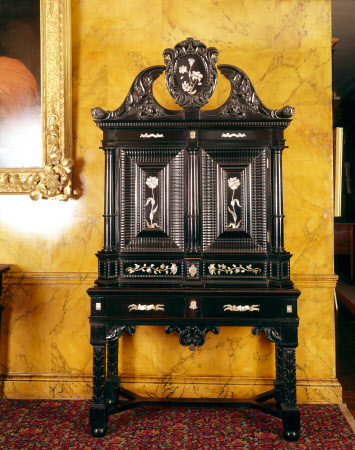 An ebony and mother of pearl inlaid cabinet on stand, attributed to Herman Doomer (b. Anrath, Germany c. 1595 - d. Amsterdam, Netherlands 1650) circa 1640 with some later additions. The cabinet with a carved swan neck pediment and oversized cartouche inlaid with flowers, above a pair of ribbed moulded panelled cupboard doors also inlaid with flowers and enclosing a later fitted interior of drawers around a cupboard door. The drawers inlayed with rosewood and bone in geometric designs and the door of ebony. The inside of the cupboard doors inlayed with a simple geometric design of kingwood and rosewood. Below the doors is a further pair of drawers inlaid with trailing flowers and all flanked by turned columns raised on panelled plinths. The stand with a further drawer and applied carved apron, raised on carved square section baluster legs tied by stretchers, turned bun feet Alterations to the interior and some later mother of pearl inlay.