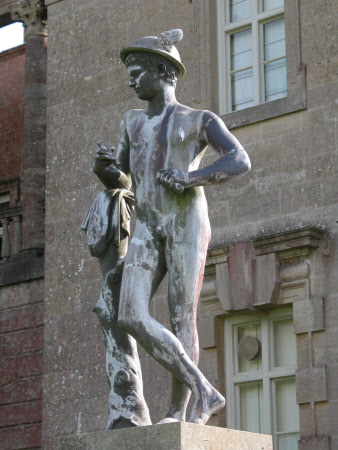 Lead sculpture, Mercury by John Cheere (1709 – London 1787), 1765/66. Lead statue of Mercury, after the antique, supplied by John Cheere. Ultimately after an Antique marble in Uffizi Gallery, Florence (Haskell and Penny 1981, no.61, p.266) which was first recorded in 1536 when it was in the statue court of the Belvedere and by 1568 it was in the Palazzo Pitti and by 1734 in the Uffizi but could be after bronze copy ex-Farnese collection in Naples (now in Louvre); plaster copies at Wentworth Woodhouse, Hagley Hall and Holkham Hall (William Kent; and Matthew Brettingham the Younger had a mould taken from marble Farnese statue, recorded in 1773). This version supplied by Cheere for the Temple of Apollo, 1765-66 could be taken from versions by Barthélemy de Melo for Versailles in 1684/5. Removed to West Garden 1903-4.