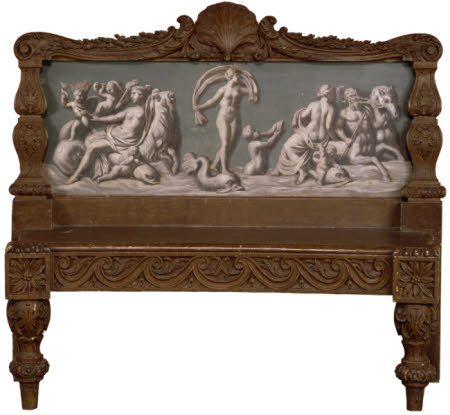 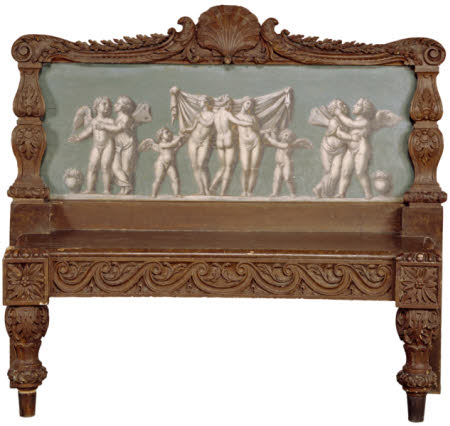 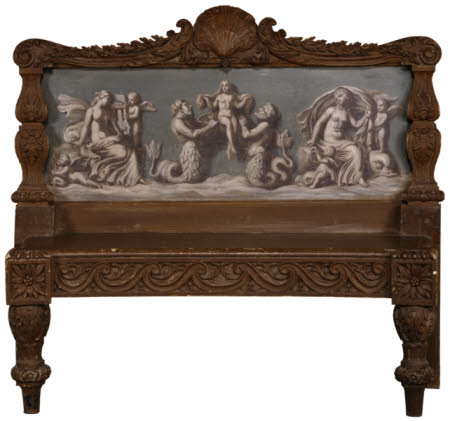 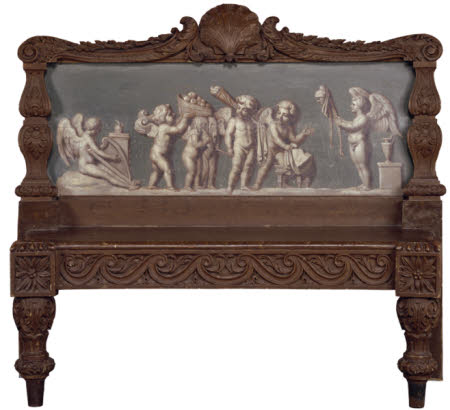 A set of four oak grained deal seats or benches with 'en grisaille' painted back panels depicting classical scenes, possibly designed by Henry Flitcroft (1697-1769) for the Pantheon at Stourhead. The painted panels attributed to Henry Hoare of Bath RA (c.1707-1792). English, circa 1760. The top rail carved to the centre with a scallop shell flanked by leaf carved and scrolled brackets held by waisted baluster moulded supports also with leaf carved decoration. The back panels depicting 'Marine Venus', 'The Marriage of Cupid and Psyche', The Three Graces' and 'The Birth of Venus' . The inverted breakfront solid plank seat with a Vitruvian scroll carved apron and flower head block ends with leaf carved and fluted turned waisted front legs and square section back legs.

These seats were made for the Pantheon, a temple in the gardens at Stourhead dedicated to Hercules which was loosely modeled on the Pantheon in Rome. Fitting out its central rotunda was a lengthy process which began in 1753 and was not completed until 1761. The architect Henry Flitcroft (1697-1796) was responsible for all the temples built at Stourhead working closely with Henry Hoare. It is a possibility but by no means a certainty that Flitcroft designed the benches too. Robert Walpole noted the presence of a set of decorative benches in the Rotunda in 1762 ‘round, are for benches in beautiful classic style, invented by Mr. Hoare of Bath and painted with the history of Cupid and Psyche.’ The backs are painted on deal panels, 'en grisaille' against a green background. The benches themselves painted and grained deal to look like oak. The design of the benches derives from two sources; the back supports and the front legs taken from the throne of Jupiter in an antique relief of Mercury bringing a message to Jupiter and Juno engraved and published by Francois Perrier in 1645 and again by Pietro Bartoli in 1693, also Montfaucon, volume 1, part 1, Book II, plate XV painted versions of which can be seen at Kedleston (NT 108781) and Blickling Hall (NT 355565). The back rails of the benches, with the scallop shell crest possibly derive from a settee at Stourhead (NT 731651.4) but it does not appear in the inventories of 18th and 19th centuries so there is no way of knowing whether it was purchased by Hoare at the time. Hoare's ledgers of his expenditure from 1734 to 1785 survive although mostly only bill amounts and not the names of tradesmen, craftsman and artists, however there are a few recorded payments made to named individuals. On 17th October 1760 we know he paid William Hoare £200 for 'one month labour in paint' the date and the amount of time taken seems correct for the benches to be completed. For further discussion and research see: Dodd, Dudley 'Fit for the Gods, Furniture from Stourhead's Temples' NT Apollo 2007 pp.14-22 James Weedon (February 2018)