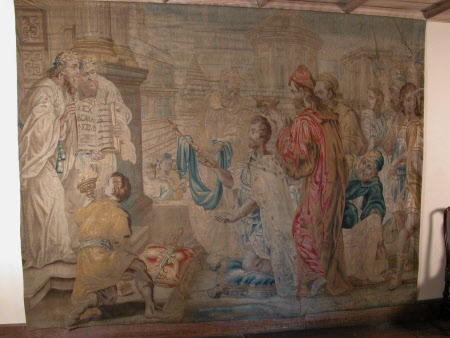 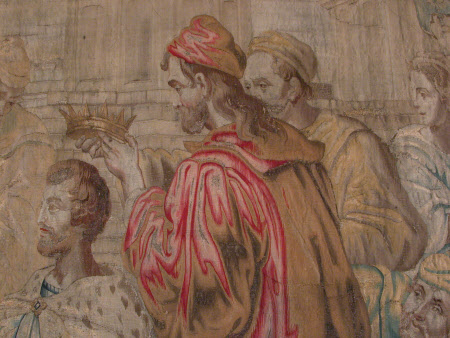 Tapestry, wool and silk, 7-8 warps per cm, The Coronation of Marcus Aurelius from a set of two of the History of Marcus Aurelius, workshop of Michiel Wauters after a design by Abraham van Diepenbeeck, c. 1660-1679. Marcus Aurelius kneels in the centre facing left, wearing a leopard-skin cloak over his armour. In one hand he holds a golden staff, and with the other he gestures towards a sword which lies on a red cushion in front of him. To the left two men wearing laurel wreaths stand on a low dais, holding a large book from which Marcus Aurelius reads. The book is inscribed ‘LEX ROMA NORBUS’ and a small boy illuminates its pages with a torch. Marcus Aurelius is surrounded by attendants, including a man in a red robe who holds a crown above his head. A crowd of people watch from the right hand side. In the background there are classical buildings. The borders of the tapestry have been removed.