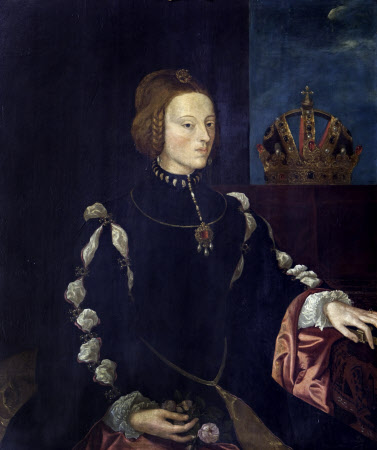 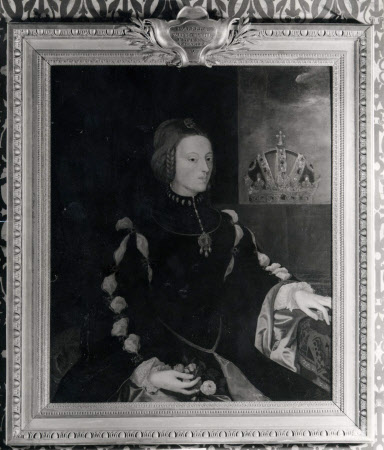 Isabella was a Portuguese Infanta (Princess), who married Charles V, the Holy Roman Emperor in 1525. When Isabella died in 1539, during the birth of her sixth child, her husband was devastated, and wore black for the rest of his life. This picture is a variant of the original, which now hangs in the Museo del Prado (Madrid). Her dress is actually closer that that in Titian’s double portrait of her with Charles V, known today only thorough the copy by Rubens. The crown on the ledge is also an addition. Given that the picture is painted on oak, rather than canvas, it seems likely that the artist is a Northern copyist, perhaps working after an engraving by Pieter de Jode. A crown and cipher on the back of this picture show that it once belonged to Charles I. It was recorded has having been hung in the Privy Gallery at Whitehall.

Oil painting on canvas, Isabella of Portugal, Empress of Spain (1503-1539) (after Titian), possibly by Miguel de la Cruz/ Michael Cross (active c.1630-1660), the artist sent to Madrid by Charles I to copy the Titians, financed by Sir Arthur Hopton. This is a variant of the portrait in the Prado of the wife of Emperor Charles V. A three-quarter length portrait, wearing a black dress slashed with white at the sleeves, shoulders and collar seated to right, holding flowers(roses) in her right hand, her left hand placed on a table and her crown resting on a window sill behind her on the right with a plain exterior aspect. Her dress is close to that in the double portrait of her and Charles V, known today only through a copy by Rubens. This work belonged to Charles I, on the back is the royal cipher and number 459, and hung in the Privy Gallery at Whitehall, no. 11 ('bought by the Kinge of [sic] Nathaniell garrett'); ...;bought by George Lucy 1835 at Mr Stanley's sale for £23.10s. 6d.;

Verso: Charles I Crown and Cipher and number 459 on reverse