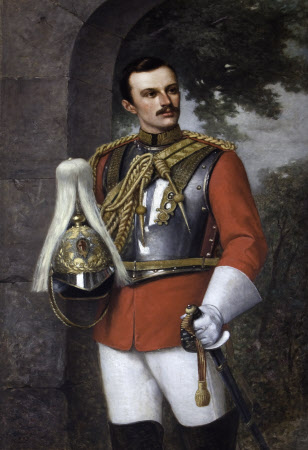 Oil painting on canvas, Sir Henry Cameron Ramsay-Fairfax-Lucy, 3rd Bt (1870-1944), as a Major in the Life Guards, after Alfred Edward Borthwick (Scarborough 1871 – Edinburgh 1955). A three-quarter-length portrait, Sir Henry Cameron Ramsay-Fairfax-Lucy, 3rd Bt (1870-1944), standing and looking slightly to left. He is in the uniform of the Life Guards with breast plate and holds his helmet with white plume in his right hand. His left hand is on his sword hilt. He has short dark hair with a moustache. He is standing by a stone archway with a tree branches also visible. In large giltwood frame, hanging from chains. Sir Henry Fairfax-Lucy married Ada Christina Lucy (1866 - 1943), eldest daughter and heiress to Henry Spencer Lucy (1830-1890) of Charlecote, and assumed the additional name and arms of Lucy in 1892; in 1921 he assumed the further name of Cameron after his mother-in-law Christina Cameron Campbell.