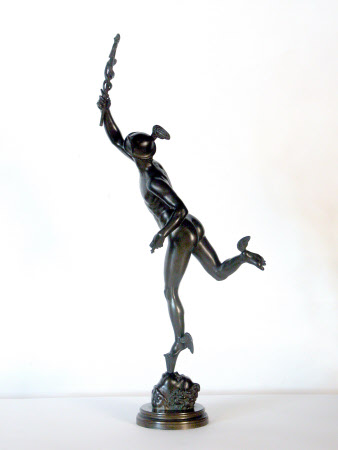 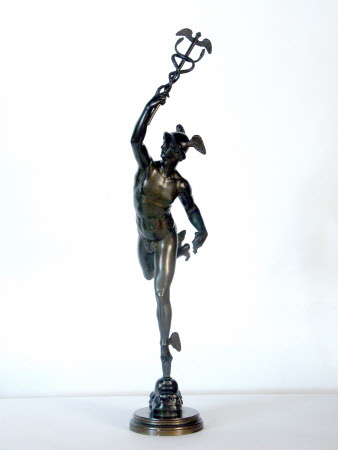 Bronze sculpture, Mercury, after Giambologna (Douai 1529 - Florence 1608). Adapted from the version of Giambologna's Mercury in the Louvre. The Louvre bronze was sent to France from Florence in 1598, and is an example of a late type of Mercury evolved in Giambologna's workshop in the 1590s although in this example he is holding the caduceus, which identifies him, in his right hand, possibly an erroneous addition, as he holds the handle on the usual left. He is balancing tiptoe on his left foot, seemingly flying through the air, having emerged from the wind, Zephyr. Mercury was the divine messenger of the gods and his right hand is pointing upwards toward heaven. Inscription on the base illegible. Wing on helmet loose. Bronze sculpture on a circular base. A male figure balancing his left foot on the wind expelled from the head at the base. He wears a winged helmet and has a cauceus with serpents entwined, aloft in his right hand. He looks off to his right. After the original by Jean de Boulange (1529-1608) in the collection at the Louvre.