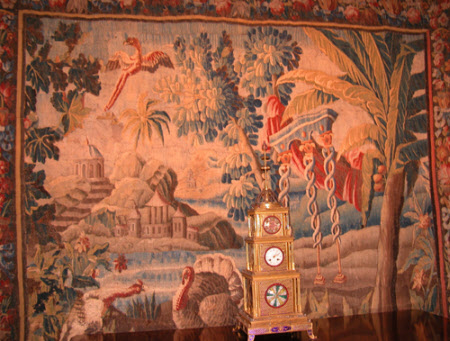 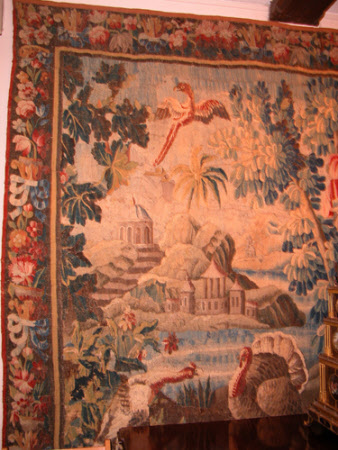 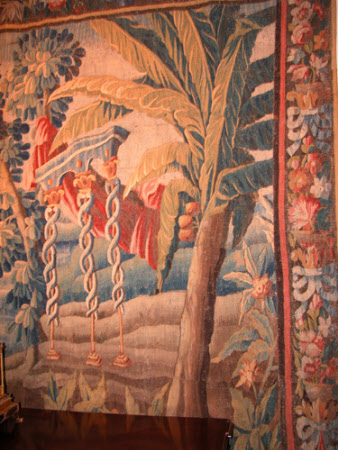 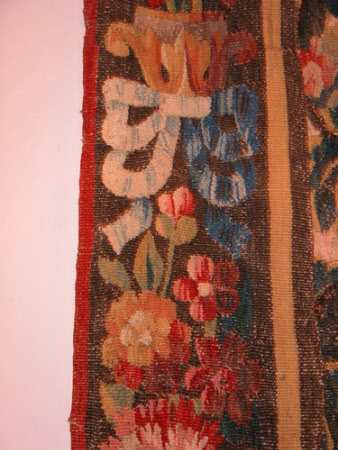 Tapestry, wool and silk, 3 warps per cm., Exotic Landscape with Turkeys, Aubusson, c. 1710-1740. On the left is an island in a lake with two small temple-like buildings and a flight of steps, and in the foreground two large turkeys fighting. A pheasant-like bird flies above the island. In the landscape on the right is a strange construction of three narrow twisted columns joined by a pediment with a red curtain draped from one corner. There is a large palm tree in the right foreground, another large tree in the centre, vine leaves on the left hand side and smaller plants in the foreground. A border of flowers tied with blue ribbons on a dark brown ground has been sewn on to the tapestry on all four sides and may not be original to it.

The tapestry is one of a pair that hang in the Living Room at Anglesey Abbey (see also 516761). Both tapestries were made at Aubusson in the first half of the eighteenth century but despite being similar in size and design they probably do not come from the same set. The two tapestries have a slightly different warp count, different borders (although those on the present tapestry may not be original) and their subject matter is slightly different: the present tapestry has a 'chinoiserie' theme whereas its companion does not. Tapestries with exotic landscapes and buildings had been popular in France since the 1690s, when a series of the 'Story of the Emperor of China' was woven at Beauvais (Standen, 1976). In the early eighteenth century tapestries with 'chinoiserie' designs were introduced at Aubusson. Some of the Aubusson designs take elements from the earlier Beauvais series but the Aubusson tapestries are quite different, predominantly landscape compositions often with outlandish natural features as in the present example, exotic plants and birds, and fanciful elements of 'Chinese' architecture sometimes based on printed sources. The two fighting turkeys link the tapestry to a related genre that was popular at Aubusson, of landscapes populated only by birds. The large number of surviving Aubusson 'Chinoiserie' tapestries gives an indication of the popularity of the genre in the eighteenth century (see for example Standen 1985, vol. II, cat. no. 95, pp. 620-1; Bennett 1976, cat, no. 71, pp. 230-1; Aubusson 1983). A tapestry with a design very close to the Anglesey Abbey 'Fantastic Landscape with Turkeys' is at Schloss Bruchsal, Baden-Wurttemberg (Southern Germany), part of a set of five (Weinheim 2002, pp. 86-91). Three of the Schloss Bruchsal tapestries are signed: 'M.R.DAVBUSSON' (for Manufacture Royale d'Aubusson), 'DAVBVSSON. RAYNAU[D]' and 'MR DAVBVSSON. P.COVLODON'. Raynaud, or Reynaud, and Coulodon, or Coulondon, are both the names of established Aubusson families of tapisseries (Chevalier, Chevalier and Bertrand 1987, pp. 73, 193), and it is possible that the present tapestry was woven by one of these makers. (Helen Wyld, 2011)