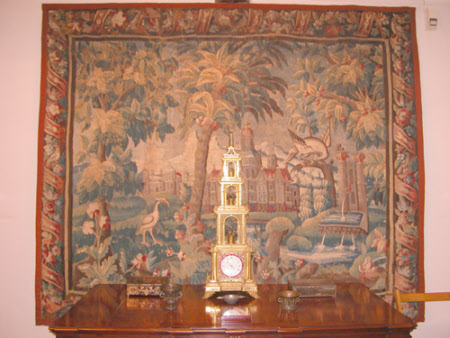 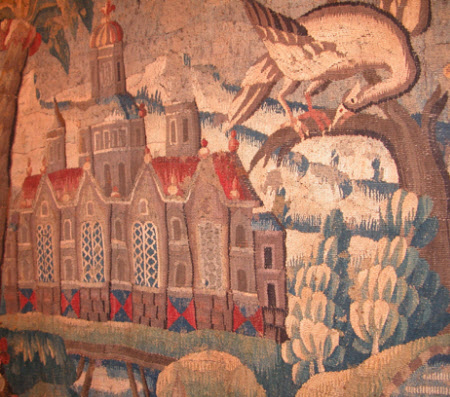 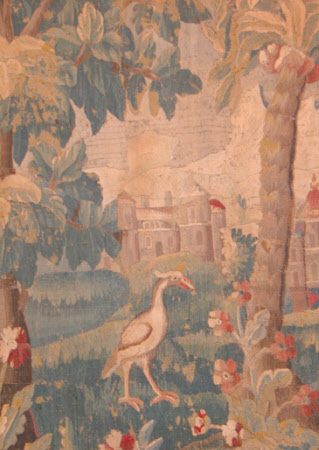 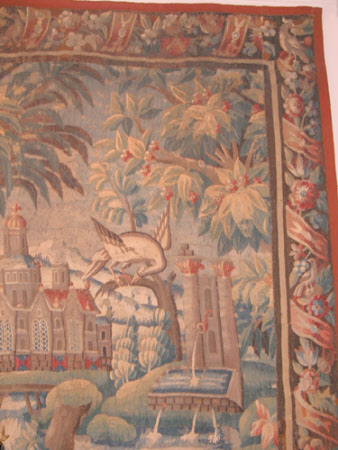 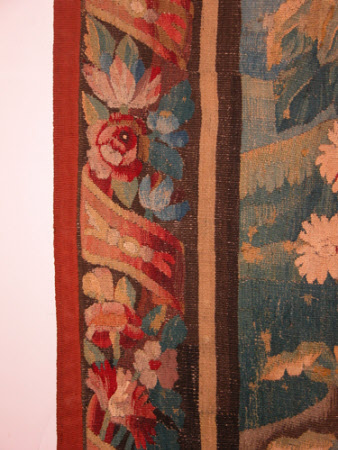 Tapestry, wool and silk, 3½ warps per cm, Landscape with Fountain, Aubusson, c. 1710-1740. In the centre is a building with four bays with narrow windows and pointed gables, a large cupola in the centre and at either side a tower rising above a sloped red roof. To the left a smaller building nestles in the landscape, and to the right, closer to the foreground, is a fanciful stone structure with a water jet flowing into a stream that runs across the foreground of the tapestry. A bird perches on a tree by the fountain and another stands on the grass to the left, between two large trees, one a palm tree. Leaves and colourful flowers grow in the foreground. The border consists of a wide red ribbon twisting around a band of flowers on a brown ground. The upper and right-hand borders have been re-attached, and an orange-brown galloon has been applied around all four edges.

The tapestry is one of a pair that hang in the Living Room at Anglesey Abbey (see also 516765). Both tapestries were made at Aubusson in the first half of the eighteenth century but despite being similar in size and design they probably do not come from the same set. The two tapestries have a slightly different warp count, different borders and their subject matter is slightly different, as no. 516765 has a 'chinoiserie' theme but the present tapestry does not. Landscape tapestries or verdures, with details of picturesque buildings and birds, were produced in large numbers at Aubusson in the early eighteenth century (Chevalier, Chevalier and Bertrand, p. 55). Such tapestries were cheaper to produce than figural compositions, and their decorative designs and bright colours made them very popular. (Helen Wyld, 2011)