Heraldic Lion for the Admiralty and Marine Affairs Office 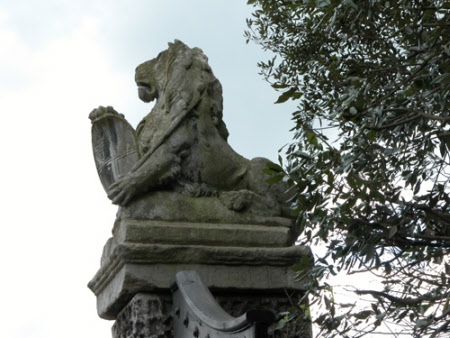 Portland stone, Heraldic Lion, British (English) School, c.1694-1707. One of a pair of heraldic lions carved of Portland stone for the Admiralty and Marine Affairs Office (1546-1707), surmounting rusticated frostwork gate piers (with NT 516649). The lions sejant erect, seated on the haunches, supporting shields with the coats of arms of the Admiralty and Marine Affairs Office, quarterly of France Modern and England.

The lions support the coats of arms for the Admiralty and Marine Affairs Office (1546-1707), a government office of the Kingdom of England and the English Navy's central command. This office existed until 1707 when the Kingdom of England and the Kingdom of Scotland were unified. The name changed to the Admiralty Department or Admiralty of Great Britain and the arms were also changed. During the reign of William III (1689-1702) Wallingford House, Whitehall, was officially appointed for the Admiralty and Marine Affairs Office. The first Admiralty was built on this site between 1694-5 and was replaced by the Ripley Building in 1726. Therefore the lions likely to date from the first Admiralty, and the latest possible date for their production is 1707. The piers may be contemporary or later. A bronze plaque placed on the inside of one of the piers commemorates this heritage: 'These gate piers and gates were for many years the Admiralty entrance to the Port of London Authority, which was rebuilt in 1913-22. They were placed here in 1926 by Huttleston and Henry Broughton'. The Port of London Authority was established in 1909, its former headquarters built between 1913 and 1922 at 10 Trinity Square, Tower Hill. Alice Rylance-Watson 2019

Produced for the First Admiralty, Whitehall, c. 1694-1707; removed from the Admiralty entrance of the Port of London Authority building before 1922; acquired by Thomas Crowther & Son of North End Road, Fulham; purchased from Thomas Crowther by Huttleston Rogers Broughton, 1st Lord Fairhaven (1896-1966) on 11 November 1926, £250; bequeathed by Lord Fairhaven 1966 with the house and the rest of the contents.