Term in the form of Hercules 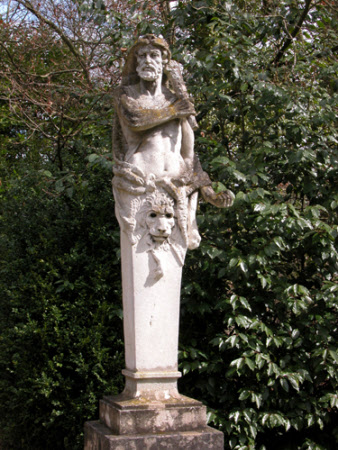 Limestone, Hercules, probably French School or British (English) School, probably 18th century, after Louis Le Conte, Le Conte de Boulogne (1639-94). A terminal figure in the form of Hercules, wearing a lionskin, the mouth worn over the head as a hood, and with the skin of the Nemean Lion tied around the hip. The proper right arm is drawn across the chest, the proper right hand holding aloft a club. The proper left hand drawn into a fist. The figure terminates in a tapering square pillar. After the term of Hercules by Le Conte de Boulogne, Parterre de Latone, Versailles (MR 1941). Mounted on a stone block. Paired with NT 516646, a terminal figure in the form of Vertumnus.