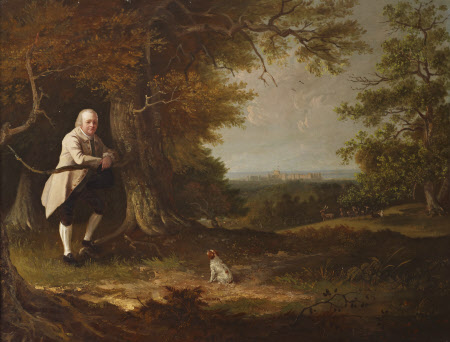 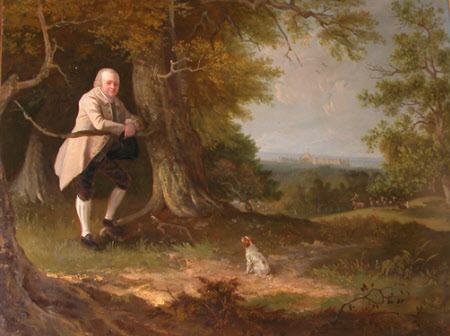 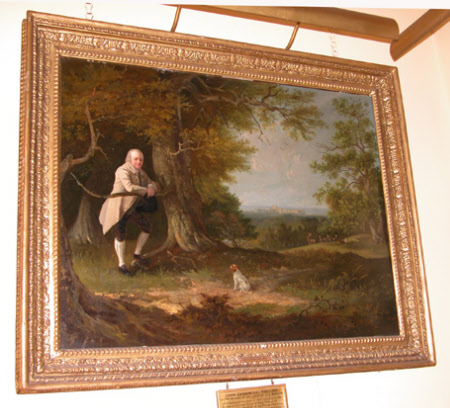 John Carbonell was a wine merchant to George III in the 1770s. He founded the well-known firm Carbonell, Moody and Walker, wine merchants in Regent Street. He is shown standing in Windsor Great Park with the castle just visible in the distance. Two artists seem to have been involved in the making of this picture. Carbonell and his dog are in the precise style of the eighteenth- century German artist Johann Zoffany, who had come to England in 1700 and was well known for his theatrical scenes of the actor Garrick as well as his sensitive portraits of Queen Charlotte and the royal family, while the background, which is much more splashily painted, seems to be the work of the nineteenth-century landscapist, Edmund Bristow.

Oil painting on panel, John Carbonell (1760-1837) in the Grounds of his House at Windsor by Edmund Bristow (Eton 1787 – Eton 1876), around a figure by Johan Zoffany (1733-1810). A full-length portrait of John Carbonell standing to the left of the picture, resting on the branch of a tree, with a dog beside him, and a distant view of Windsor in the background.

Frame: John Carbonell Esq by E. Bristow 1787-1876 Picture: John Carbonell Esq Jun'r in the grounds of his house at Old Windsor. John Carbonell was born in 1760 and died in 1837. He was an intimate friend of King George IV. He married the daughter of Sir William Parsons, who was Master of the King's Music at the time. John Carbonell left in his Will several royal wedding presents received by him on his wedding, from George IV. He started the well-known firm of wine merchants in Regents Street, which was closed by his grandson 30 years ago. From the Collection of his Great Grand-daughter. Frame - reverse: Zophaine Bristow