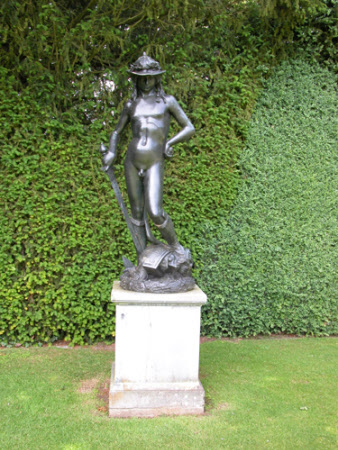 This image of David, only wearing a helmet, has been described as the first nude of the Renaissance. He is triumphantly standing, hand on hip, with the head of Goliath under his foot and holding the dead giant’s massive sword.Goliath was a Philistine hero who, according to the biblical story in I Samuel 17 was nine feet tall. He challenged the Israelites saying that their best warrior should fight him and if he won, the Israelites would be his slaves, but if he lost, the Philistines would be enslaved. Goliath issued his challenge for forty days but no one was brave enough to meet him in single combat until the young shepherd, David, came forward without armour or sword. He killed Goliath using a stone and a sling and cut off his head with Goliath’s own sword. The biblical subject was a symbol of true Faith over Heresy.

Bronze, David, probably Italian (Florentine) School, after Donatello (Florence c.1386 – Florence 1466), probably 19th century. A bronze reproduction of Donatello's bronze statue of David standing triumphant over the head of Goliath (c. 1440s) in the Bargello, Florence. A full-size figure of the Israelite shepherd boy David, nude with the exception of a hat crowned with laurel and sandal-boots. In his proper left hand David holds the rock he used to kill the Philistine giant with a single sling-shot to the head. In his proper right hand he holds the sword with which he decapitated him. David's proper left foot rests on the head of Goliath, with flowing beard and an embossed winged helmet, the feathered wings extending up David's proper right leg and across the base of the statue. The embossed design depicting the Triumph of Love, with Cupid in a chariot led by putti. The base rendered as a laurel wreath. With grey-green patination; mounted on a stone pedestal.

The original bronze is believed to have been commissioned by Cosimo de'Medici (1389-1464), the banker, politician and great patron of the arts who was the first Medici to de facto rule the Republic of Florence. David has been interpreted as a symbol of Florentine liberty and civic virtue when the Republic was being threatened by rival, despotic Italian states. The statue is celebrated as the first known free-standing nude in bronze to have been produced since antiquity. This copy was likely cast in the 19th century when the vogue for replicas of Renaissance works of art was at its height. A bronzed plaster cast is in the Cast Courts of the Victoria and Albert Museum, London (inv. no. REPRO.1885-197). Alice Rylance-Watson 2019

Purchased by Huttleston Rogers Broughton, 1st Lord Fairhaven (1896-1966) from Bert Crowther, Syon Lodge, Middlesex, 9 October 1952, £30.0.0; bequeathed to the National Trust by Lord Fairhaven with the house and the rest of the contents.