Woman after the bath (‘The Cesarini Venus’) 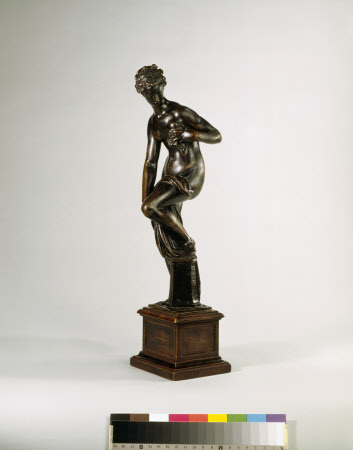 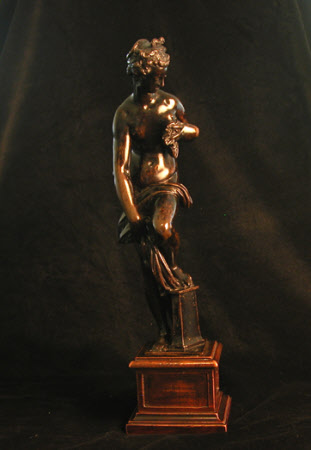 Bronze on wooden socle, A woman after the bath (‘The Cesarini Venus’), Florentine, after a model by Giambologna (1529-1608), model c.1583; probably cast c.1620-70. A bronze statuette of a naked woman, depicted as if she has emerged from the bath and is drying herself. She stands, her hair elaborately arranged, head turned to her left, with an abstracted, self-absorbed gaze. Her left leg is raised and her foot rests on a hexagonal pedestal; a swathe of drapery winding around her upper legs and falling between her knees, whilst she dries her left breast with a small towel. Cast with small rectangular base plate, with holes drilled at each corner for screws that attach the sculpture to its wooden socle. Screw at front left missing. Circular plug in woman’s right foot. Incised into side of base directly below woman’s left foot is the number, ‘No. 210’. On the adjacent side at back, another incised number has been gouged out, but almost certainly once read ‘48’. Brown lacquer patination; below it, some traces of a golden surface. Head of woman was separately cast, the joint now visible.