Danaë and Cupid (after Titian) 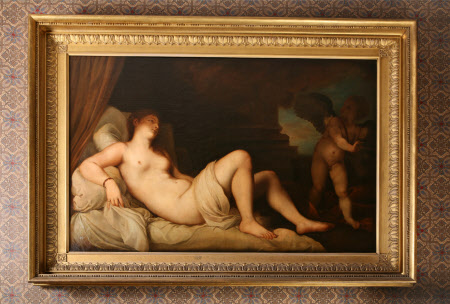 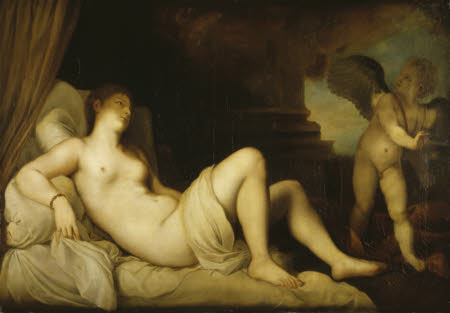 According to Greek mythology, Danaë’s father, Acrisius, king of Argos was told he would be killed by his daughter’s son, so he locked her in a tower. As told in the Roman poet Ovid’s Metamorphoses, Jupiter comes to her, disguised as a shower of gold. Their son, Perseus did accidentally kill his grand-father with a discus. This is a copy of Titian’s version in the Museo de Capodimonte, Naples of 1545 with an attendant putto in place of an old woman catching the coins in her apron in the painting now in the Museo del Prado, Madrid.

Oil painting on canvas, Danaë and Cupid (after Titian), after Titian (Pieve di Cadore 1488/90 - Venice 1576), 19th century. A reclining female nude on a bed with draped material with dressed brown hair and looking to the right. A piece of material is draped over her right leg, and she is adorned with drop pearl earrings, and a bracelet with black beads with matching ring. Her right leg is bent and her left falls to the side, a pillow supports her right arm. To the right, Cupid stands looking towards the sky. According to mythology Danaë, daughter of Acrisius, king of Argos, was imprisoned in a tower by her father because of a prophecy that her son would kill him. In the Roman poet Ovid's Metamorphoses he tells of the God Jupiter coming to her as a shower of gold. Their offspring was Perseus, who indeed accidentally killed his grandfather with a discus.