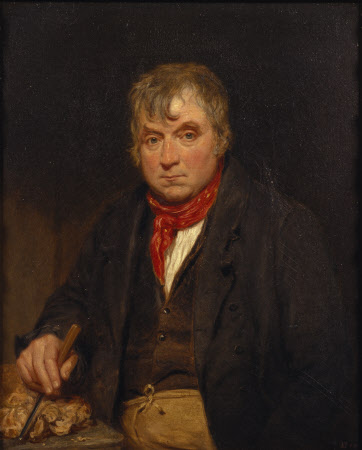 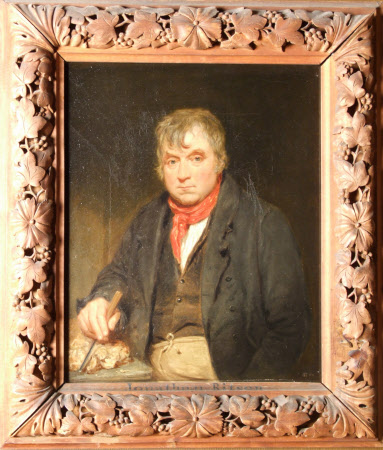 This, and the portrait of Grinling Gibbons (also at Petworth) depict the craftsmen who created the carvings at Petworth. They were commissioned by the 3rd Earl of Egremont for the Carved Room. Jonathan Ritson was the son of a Whitehaven carpenter. He first went to Petworth in 1815 soon after the Duke of Norfolk’s death, when Lord Egremont employed him on the restoration of the Grinling Gibbons room. Ritson’s great technical proficiency was superior to his sense of design. His carving was allowed to run riot on all available spaces of wall and ceiling and the majority of his embellishments were removed in 1869. Only three large, compressed and florid compositions were allowed to remain, as they can be seen today, on the core of the ceiling. Ritson was apparently treated at Petworth ‘with too much indulgence, and tempted by an inordinate love of strong beer.’

Oil painting on canvas, Jonathan Ritson (1776-1846) by George Clint, ARA (London 1770 – Kensington 1854), circa 1830. A half-length portrait, seated, full face, and wearing a red neckerchief, grey jacket, and brown apron. A chisel is in his right hand. Jonathan Ritson, who completed the work in the Carved Room at Petworth House, was a native of Cumberland, and when quite a boy, was employed, together with his father, at the carved work in the library at Arundel Castle, by Charles, Duke of Norfolk. When about thirty-five years of age, he was first patronised by George O'Brien Earl of Egremont, and on the 30th of March 1816, commenced his labours at Petworth, which lasted, without interruption, for about a year and a half, at the expiration of which, he went to London, and was absent for ten years. On the 1st September, 1827, he finally returned to Petworth, and continued in constant employment until March 1846, a period of nearly nineteen years, when his memory and physical powers having become much impared, he was allowed a pension by Colonel Wyndham. He died soon afterwards on the 10th of April, 1846, having, however, fulfilled his mission - the completion of the Carved Room at Petworth.