Head of Aphrodite (The Leconfield Head) 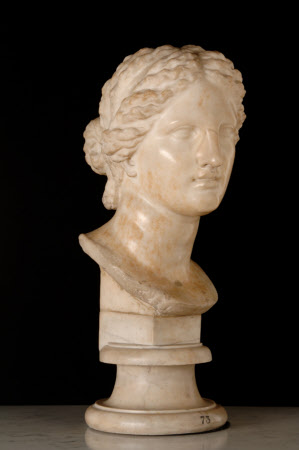 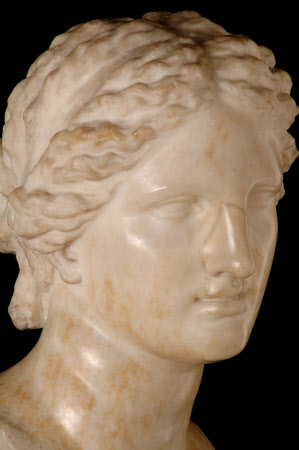 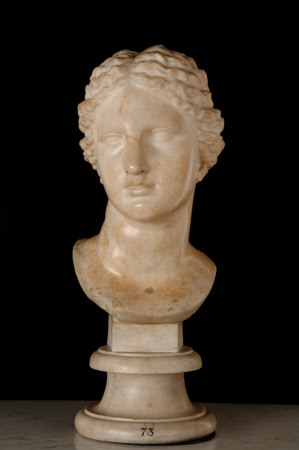 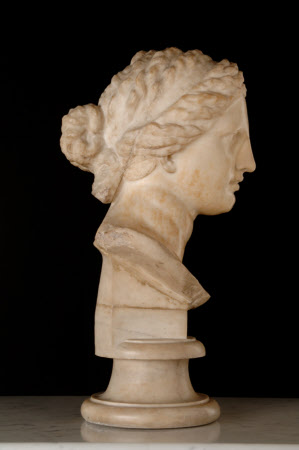 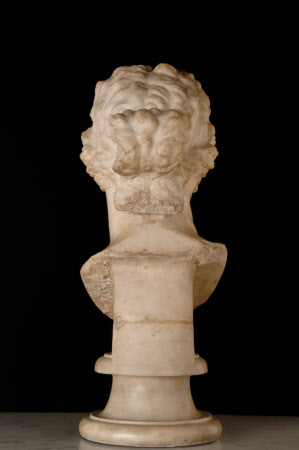 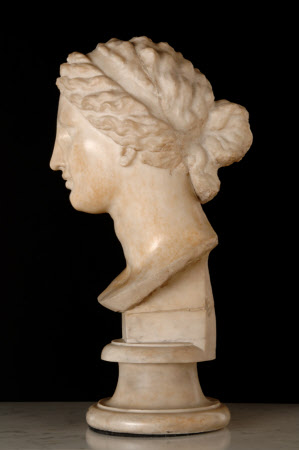 Parian marble, head of Aphrodite, known as The Leconfield Head, attributed to Praxiteles, c.400-330 BC. The head of Aphrodite, Greek goddess of love, depicted in the Aphrodite of Knidos type. Mounted on a later marble pedestal but originally made to be attached to a full-length, possibly draped, statue. The head is tilted slightly to proper right, neck to proper left, the hair parted at centre and styled in a loose chignon with ribbon. The nose and top lip are later restorations; the back of the head and chignon were worked from a different piece of marble and added on. Later polishing has removed much of the ancient surface of the marble around the face and neck; the surface of the hair, deliberately left rough by the original sculptor, has been kept.

The attribution to Praxiteles, arguably the greatest of all Greek sculptors, was given in 1888 by the German archaeologist and art historian Adolf Furtwängler. When he first saw the Leconfield Head he was 'enraptured by its beauty', 'Nothing is worthy to be compared with it except an original such as the Hermes of Olympia' (Furtwängler 1885, p.343). Drawing close comparisons of style, material and technique to Praxiteles' Hermes of Olympia, the only surviving work possibly by Praxiteles himself, Furtwängler concluded that the Leconfield Head was the closest he had seen to an original work by the sculptor than any other attributed copy (Furtwängler 1885, p.345). Praxiteles' importance resides in the sculptural types he originated. It is he who depicted the nude female form in sculpture for the first time, in his masterpiece the Aphrodite of Knidos, a cult statue made for the Temple of Aphrodite at Knidos. The original no longer exists but copies and derivations survive, the most famous being the Venus de' Medici in the Uffizi Gallery, Florence. The Leconfield Head was bought on behalf of Charles Wyndham, 2nd Earl Egremont (1710-63), by one of two agents who, from 1750, helped him to assemble one of the finest collections of antique sculpture in Britain. Wyndham's agents in Rome were Gavin Hamilton (1723-98), the Scottish artist and antiquities dealer, and Matthew Brettingham (1725-1803), son of Matthew Brettingham the Elder, architect of the North Gallery at Petworth House. Evidence to suggest Hamilton was the agent is derived from the private Account Book of the 2nd Earl which records payment of £50 in 1755 to Gavin Hamilton for 'an antique bust of Venus'. Hamilton is listed as the procurer in Praxitèle at the Musée du Louvre, 2007 (Pasquier and Martinez 2007, p.116-7, no.18). Brettingham, on the other hand, is suggested as the possible agent by John Kenworthy-Browne owing to an entry in his Account Book for 1753 where an 'Antique Head of Venus excellent, Marble' is listed. The head was 'Bought of Cavaceppi' [i.e. Bartolomeo Cavaceppi] 'for 105 <Scudi>' (Kenworthy-Browne 1983, pp.62, 81). For a description of the 2nd Earl Egremont's collection see Christopher Rowell, Petworth: The People and The Place, National Trust, London 2012. A cast of The Leconfield Head in the Cité de l'Architecture et du Patrimoine, Paris, shows how the original looked in the early 19th century when two engravings of it were made for the Society of the Dilettanti (Payne-Knight 1809, plates 45-6). The Paris cast is reproduced and described in comparison to the original head in Andrew Stewart, 'A Cast of the Leconfield Head in Paris', Revue Archéologique, Nouvelle Série, Fasc.2 (1977). Alice Rylance-Watson December 2018

Acquired for Charles Wyndham, 2nd Earl of Egremont (1710-1763) by Gavin Hamilton ('an antique bust of Venus' listed in the 2nd Earl Egremont's private Account Book, 1755) or by Matthew Brettingham (Brettingham Account Book, 1753, 'Antique Head of a Venus, excellent', 'Bought of Cavaceppi...Venus for 105 <Scudi>'); thence by descent, until the death in 1952 of the 3rd Lord Leconfield, who had given Petworth to the National Trust in 1947, and whose nephew and heir, John Wyndham, 6th Lord Leconfield and 1st Lord Egremont (1920-72), arranged for the acceptance of the major portion of the collections at Petworth in lieu of death duties (the first ever such arrangement) in 1956 by H.M. Treasury.