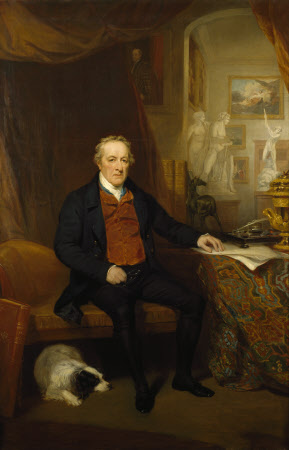 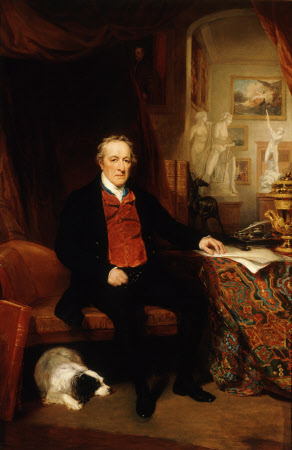 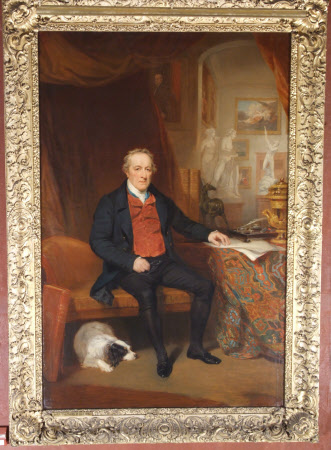 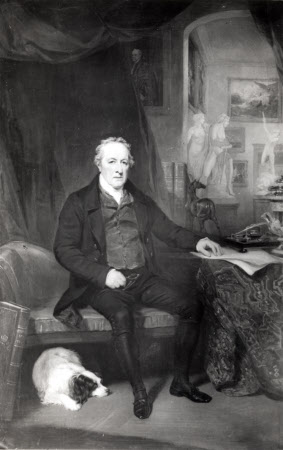 Lord Egremont was the greatest patron of British artists in the first third of the 19th century, having decided to use his great wealth for that purpose, rather than to buy the Old Masters that were flooding into the sale-rooms from the Continent. This is a posthumous picture by his favourite portrait-painter, summing up his patronage. He sits in the North Gallery at Petworth, which he extended to hold his collections. The works of art include Hilton's Rape of Europa, Turner's 'Egremont Seapiece', C.R. Leslie's Sancho Panza and the Duchess, Flaxman's St Michael, and J.E. Carew's Venus at Vulcan's Forge.

Oil painting on canvas, George O’Brien Wyndham, 3rd Earl of Egremont (1751-1837) in the North Gallery, Petworth by Thomas Phillips, RA (Dudley 1770 – London 1845), 1839. Full-length posthumous portrait, wearing a black coat and breeches and with his left hand on a paper on a table. He is shown seated, three-quarters right, in the North Gallery, a dog (a spaniel), by him. In the background is the North Bay with paintings by Hilton, Turner and Leslie shown hanging on the back wall. It also depicts Flaxman's St Michael and Carew's Venus, Vulcan and Cupid.

Posthumously painted for George Wyndham, 1st Lord Leconfield (1787-1869) thence by descent, until the death in 1952 of the 3rd Lord Leconfield, who had given Petworth to the National Trust in 1947, and whose nephew and heir, John Wyndham, 6th Lord Leconfield and 1st Lord Egremont (1920-72) arranged for the acceptance of the major portion of the collections at Petworth in lieu of death duties (the first ever such arrangement) in 1956 by HM Treasury

Verso: In large lettering, in black paint, on a fragment of old stretcher, attached to the present one: George Obrien Wyndham Earl of Egremont painted in the year 1798 in the uniform of the Sussex Yeomanry of which he is Colonel / By Philips [sic]; on two small labels, on stretcher and frame, in brown ink: Lord Leconfield / Fr.2