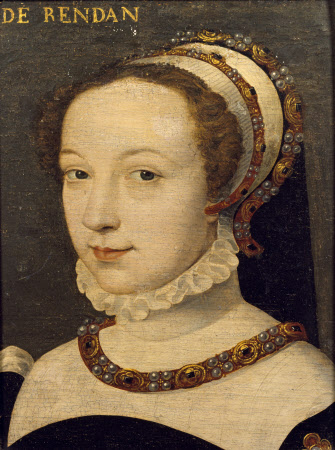 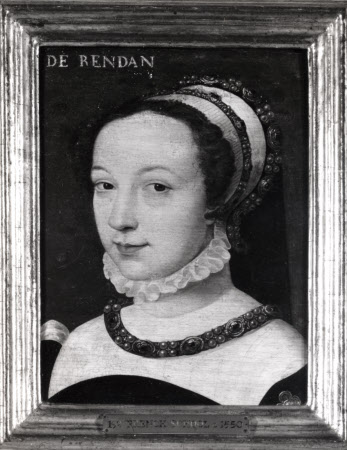 Fulvia Pico della Mirandola, Comtesse de Rendan, was maid of honour to Catherine de’ Medici. She was the wife of Charles de Larochefoucauld, Comte de Rendan, who died from wounds at Rouen in 1562. The sitter was previously identified as a ‘Lady of the French Court, possibly Catherine de’Medici’, but although there is some resemblance to this sitter, it does not seem reason enough to doubt the inscription with the name ‘de Rendan’. The inscription was revealed only relatively recently, when the picture was cleaned in 1952. The portrait appears to be by the same hand as a portrait of ‘Mme d’Alluye’ at Versailles, which was attributed to the ‘Peintre de Luxembourg-Martigues’, alias Marc Duval.

Oil painting on panel, Fulvia Pico della Mirandole, Comtesse de Randan (d.1607), French School, circa 1550. A head-and-shoulders portrait of a young woman, turned slightly to the left, gazing at the spectator, wearing a white headdress set with pearls and gold, a white yoke and collar, a small ruff and black stomacher. Round her neck she is wearing a red band set with pearls and gold. Inscribed, top left, in gold: DE RENDAN.

DE RENDAN (top left and revealed during cleaning in 1952)