The Adoration of the Magi 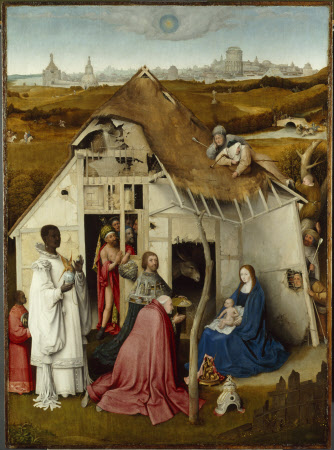 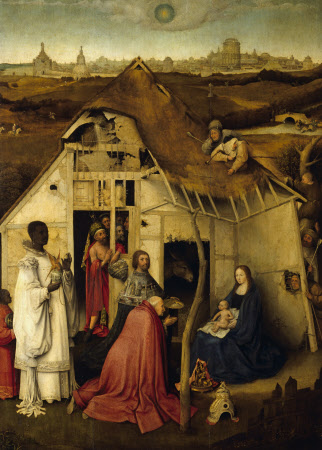 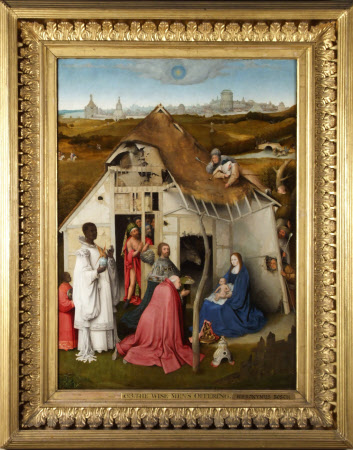 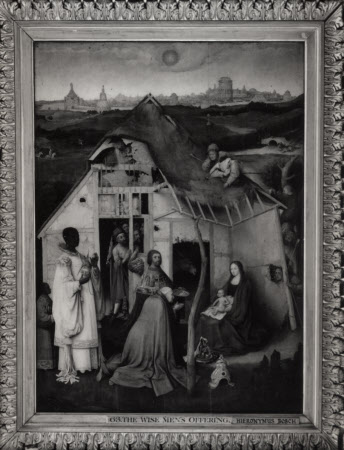 This picture is a high-quality variant of the central panel of the triptych of the ‘Epiphany’ in the Museo del Prado, Madrid, of around 1495. Another version of the whole triptych is at Upton House (NT 446744). It seems probable that the Petworth picture was created as an object for private devotion, or cabinet, with the horizon level being brought down to a plausible level. The symbolism in the picture has been much debated, but in general terms, it might be interpreted as a prefiguration of the Mass, with a complex web of reference to Old Testament prototypes of the Epiphany, and of Christ as the Messiah and Redeemer.

Oil painting on panel, The Adoration of the Magi, attributed to Hieronymus Bosch ('s-Hertogenbosch, Brabant c.1450 - 's-Hertogenbosch 1516), circa 1515. Mary is seated at right wearing a long blue mantle and holding the naked Child. At her feet kneels Gaspar, in a rose cloak, his offering, a golden Sacrifice of Isaac, at her feet; by this is a helmet of silver and gold, with Adam and Eve and two pelicans with amethysts in their bills and one pearl between them. Beyond Caspar, Melchior stands, three-quarters right, a gold patten with pearls in his left hand. He wears a short steel cape, or chasuble, with Solomon and the Queen of Sheba in the ornament and a sacrifical scene in the hem; at left, with an African page - whose robe hem shows the consumption of fish by strange monsters, which alludes to lust and orginal sin - stands Balthasar, the African King, three-quarters face, bare-headed, and with full and long sleeves from which white ribbons reach to the ground and on his shoulder an epaulette of thistle leaves. In his right hand is a silver orb (a casket of myrrh) and on it, in relief, a man kneeling to a King (David), and two soldiers - who gave water to him on the fulfillmet of his destiny as King of Israel; perched on it a parroquet with a red amethyst in its beak. Behind this group, Joseph, a Jewish priest or the Antichrist (as it has been variously suggested) stands bare chested, in the doorway of a barn wearing a green turban with thorns and a square glass vase containing a blue flower and a gold cloth veil, or hood, falling behind and with over his shoulders and arms a rose-red cloak. Inside the shed four heads are seen and above, in crevices, sheaves of corn and an owl with a large dead mouse. The ox and ass are within the barn near Mary. On the thatched roof, two shepherds, in contemporary Netherlandish dress, with a stone-spud and a pipe; a third climbing a tree, right; below him, three more, two peeping thrpugh a gap in the plaster. An imaginative great city, Bethlemen (Christ's birthplace), or, more likely, a reference to Jerusalem, in seen the distance, the golden star of the Epiphany in the zenith. This is a variant of the centre panel of the triptych of the Epiphany in the Prado, Madrid, which was dated by the Netherlandish painting expert, Max Friedländer to around 1495. The main difference is that in the Prado altarpiece the landscape is raised much higher above the stable, in keeping with the arching of the triptych, the landscape and the figures in it are also somewhat reduced, and the Christ Child holds his arms more passively. A number of copies exist, both of the complete altarpiece and of the centre panel alone, namely at Upton House (NT 447744).

Recto: in black, on strip of gilt wood at the bottom of the frame: 63. THE WISE MEN’S OFFERING HIERONYMUS BOSCH [his name on an added strip of wood]