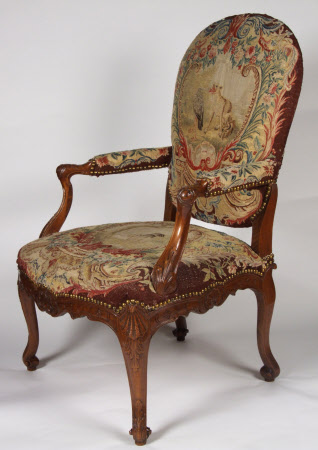 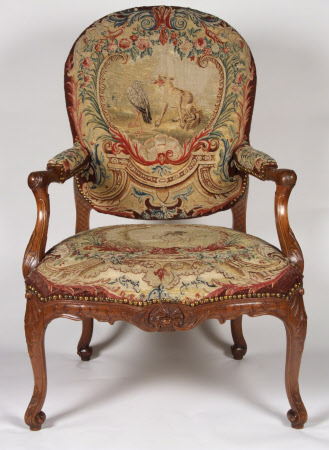 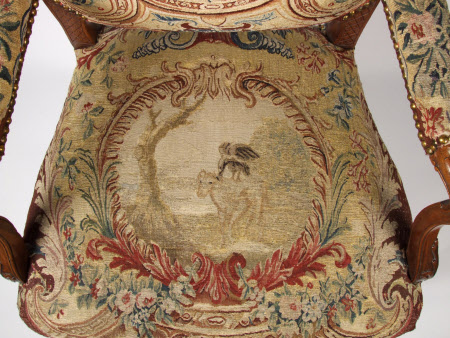 A carved walnut armchair, from a set of seven, in the French Louis XV style , attributed to Paul Saunders, circa 1760, the arched back issuing padded arm-rests on scroll supports, above a serpentine seat on cabriole legs headed by a carved shell and terminated in scroll feet, upholstered with tapestry depicting Aesop's Fables after the 1666 edition illustrated by Francis Barlow. This set is thought to have been supplied by Paul Saunders as part of the furniture listed in a bill sent to the 2nd Earl of Egremont's executors in 1763 as :"8 smaller French Elbow chairs...£40". Their construction, largely influenced by Parisian workshops, can be paralleled in other examples of Saunders' oeuvre.

Probably supplied by Saunders to the 2nd Earl of Egremont (1710-1763) circa 1760. By descent, until the death in 1952 of the 3rd Lord Leconfield, who had given Petworth to the National Trust in 1947, and whose nephew and heir, John Wyndham, 6th Lord Leconfield and 1st Lord Egremont (1920-72) arranged for the acceptance of the major portion of the collections at Petworth in lieu of death duties (the first ever such arrangement) in 1956 by H.M.Treasury.