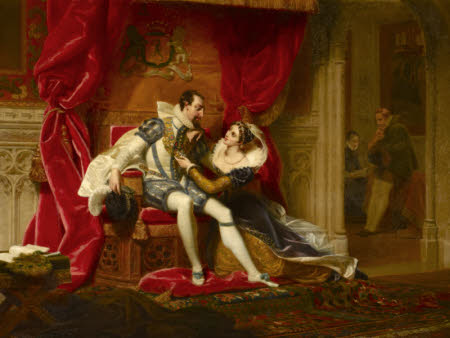 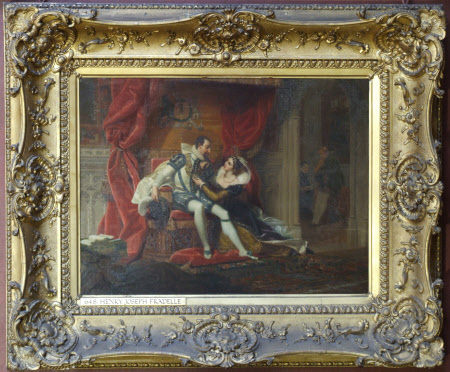 Oil painting on panel, Robert Dudley, Earl of Leicester's Visit to his Wife, Amy Robsart at Cumnor Place (from Sir Walter Scott's 'Kenilworth') by Henry Joseph Fradelle (Lille 1778 – London 1865), signed bottom left, in the triangular apex of the rear stool leg: FRADELLE 1825. Robert Dudley, Earl of Leicester's (1532?-1588) visit to Amy Robsart (1532-1560) at Cumnor Place. Leicester is shown seated on an opulent throne-like seat, with his coat of arms under a canopy and large velvet drapes, looking down on Amy who is pleading with him, kneeling on the right. Two figures (Varney? and Tresillian?) can be seen in an inner room, right. Robert Dudley, Earl of Leicester (1532?–1588), was the fifth son of John Dudley, Duke of Northumberland (1502?–1553), better known under his earlier title of Earl of Warwick, who dominated Edward VI after procuring the execution of his rival, the Duke of Somerset, Lord Protector, and who attempted to put his daughter-in-law, Lady Jane Grey, on the throne after Edward’s death. Robert aided his father and brothers-in-law in this attempt, was condemned to death like his father, but was pardoned by Queen Mary and released from the Tower a year later, in October 1554. Four years before, on 4 June 1550, he had been married to Amy Robsart, daughter of Sir John (called ‘Sir Hugh’ by Sir Walter Scott, in Kenilworth) Robsart, Lord of the Manor of Siderstern, Norfolk, at the royal palace of Sheen, in the presence of Edward VI, who noted the event in his diary (scarcely the secret marriage of Kenilworth!). She was allowed to visit him in the Tower, which does not suggest any loss of affection. Dudley’s chance came with the death of Mary I on 17 November 1558, and the accession of her half-sister, Elizabeth I. She was soon reported to be infatuated with him, and even intent on marrying him. He was named Master of Horse on 11 January 1558/9, KG on 23 April, sworn of the Privy Council, appointed Lieutenant of the Forest and Castle of Windsor, and heaped with properties and profitable licences. Lady Amy remained mostly in the country, chiefly at Denchworth, near Abingdon, but also travelled, and visited London, whilst he visited her at Denchworth. Early in 1560 she moved to Cumnor Place, not far away, which was rented by Dudley’s friend, and Chief Comptroller of his Private Expenses, Anthony Forster or Forrester. There, on Sunday 8 September 1560, when Dudley was at Windsor with the Queen, she had left a room where she had been playing at tables with her ladies, fell downstairs, and broke her neck. There were persistent rumours that Dudley had procured her murder, but an inquest declared it an accidental death, and there is no evidence to support them. Sir Walter Scott, however, took up and embroidered the story in one of his most popular historical novels, Kenilworth (1821), introducing the false notion of a secret marriage between Robert and Amy; a villainous plotter with designs on her, Richard Varney; a disappointed suitor, Edmund Tressilian; the discovery of Amy and the marriage by the Queen; Dudley ordering Varney to murder Amy; and his discovery that Varney’s accusations of her infidelity with Tressilian were false.

Recorded at No. 4, Grosvenor Place, in 1847 and at Petworth in 1856. By descent to the current Lord Egremont. On loan from the Egremont Private Collection