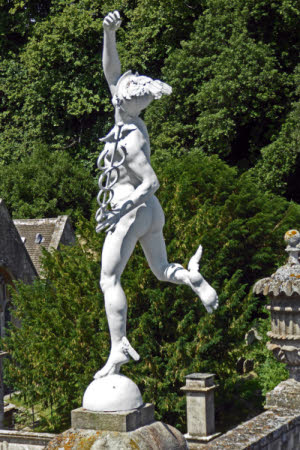 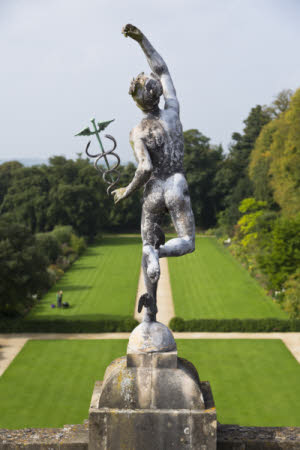 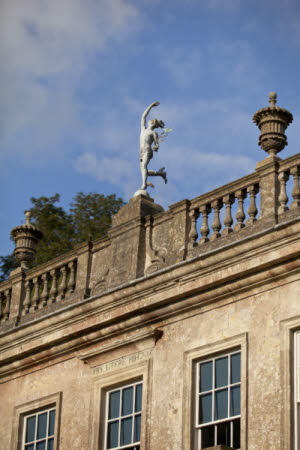 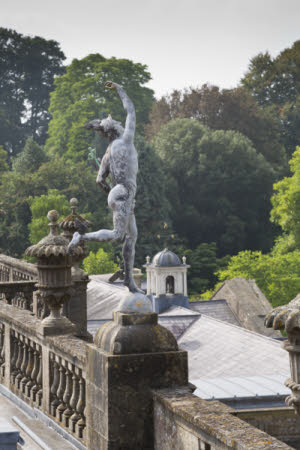 Lead statue of Mercury, the messenger god and patron of skill, eloquence and commerce, and so appealing for a government and colonial administrator such as William Blathwayt. Believed made in London by John Nost in around 1700 when he was active supplying garden sculpture for William III and other courtiers, such as a similar Mercury made for Melbourne Hall, Derbyshire, between 1704-1710. The statue is based on the famous bronze figures by Giambologna, who created four versions from 1563.

Lead statue of Mercury attributed to John Nost I (d.1710), 1703, after Giambologna (Giovanni Bologna 1524-1608). Mercury stands naked, apart from a winged helmet on his head and a piece of fabric tied around his waist which covers his genitals. He stands poised on his left leg upon a small dome, his right leg extended behind him as if in flight. His right arm is raised above his head and his face is turned upwards towards his hand. A feathered wing can be seen on each ankle. In his left hand he holds a caduceus' a winged staff with two entwined snakes, a symbolic object usually included in representations of Mercury. Remnants of gold leaf indicate that the statue was originally gilded in full, now painted grey. The statue was added to the West pediment of Dyrham Park by William Blathwayt (?1649-1717) in 1703.

This statue is of Mercury, the Roman messenger god and patron of learning, eloquence and commerce. A Latin motto mounted beneath the sculpture reads His Utere Mecum, which, loosely translated means ‘if you know better, tell me, if not, follow me’. Mercury holds a caduceus, his wand, which symbolises peace through the representation of two calmed fighting snakes. Mercury is depicted in flight, though other versions of this sculpture make this more explicit with his lower foot held on a column of air. The raised hand is reaching towards Jupiter, his father, the supreme God. This statue of Mercury is understood to be the original version, installed in 1703. William Blathwayt wrote to his cousin and agent [?] Watkins, on 20 April 1703 “I have a Mercury for ye Front of ye House which will come by land” (D1799/E243) and 14 September 1703, builder and mason Philip West paid '2 days and half a man for setting ye Merkury upon ye west front 3s 9p' (D1799/A110). The statue is clearly identifiable in Johannes Kip's engraving of Dyrham Park in 1712. It was probably made by the sculptor John van Nost in London. Nost ran a sculpture yard in Haymarket, London, and was noted for his lead garden statuary. He was a principal supplier to William III at Hampton Court Palace, including designing a fountain with Mercury at the top that was never made. Nost held an auction of his stock in 1712 (just before his death later that year) which included a statue of Mercury – perhaps the one intended for Hampton Court – with an opening price of £1. 15s 0d. A similar statue of Mercury was made by Nost for Melbourne Hall, Derbyshire, between 1704-1710. The statue was set in a fountain designed under the direction of Henry Wise for Thomas Coke. The statue of Mercury is based on the famous bronze statue by Giambologna (1529-1608); also known as Jean Boulogne or Giovanni Bologna – an Italianised Flemish sculptor. Giambologna created four versions of Mercury from 1563, each slightly different. In 1565 Duke Cosimo de’Medici commissioned a bronze statue as a diplomatic gift to Maximilian II, the Holy Roman Emperor. A version of 1580 was installed in a fountain at the Villa Medici, Rome – now in Florence. This fountain was illustrated in a print by Giovanni Franceso Venturini (Italian, active ca. 1650–1700) in 1691, and may have been known by William Blathwayt given his interest in architectural prints of Rome. The statue at Dyrham is made of lead with a bronze caduceus. It was made from a mould and probably contains an iron armature to hold the relatively malleable lead together. Traces of buff paint can be found on the hemispherical base, winged helmet, and ankle wings that suggest the statue was originally partially or fully gilded. A similar partially gilded Mercury statue was made in 1753 for Blair Castle by John Cheere (who took over Nost’s business and his statuary moulds).

Put in place on the west side of the roof of Dyrham Park by William Blathwayt (?1649-1717) during his extensive remodeling of the house between 1692 and 1704. Features included in the transfer of Dyrham Park to The National Trust by the National Land Fund in 1958.