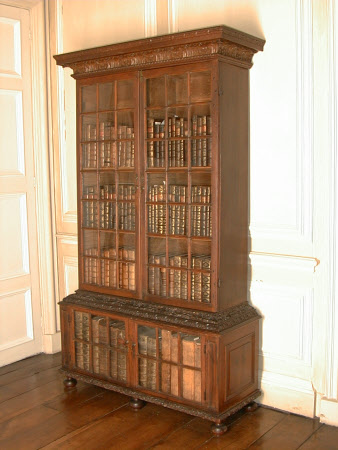 Originally one of a pair, this large and beautiful bookcase may have been designed by Thomas Sympson, master joiner and cabinetmaker to the diarist Samuel Pepys. The glazed doors and carved mouldings of rosettes and acanthus leaves are very similar to the 12 bookcases Pepys commissioned from 1666. This bookcase houses the remains of William Blathwayt’s extensive library including books in Dutch, unusual for collections of this date and reflecting his rare ability to understand the language.

An oak two section librarybookcase, originally one of a pair at Dyrham, possibly by 'Sympson the Joyner' London circa 1695 Constructed in four sections, the lower cupboard with its cornice, the two vertical halves of the upper cupboard, and finally the upper cornice. The lower cornice is carved with acanthus leaves, petals and husks above a running pattern of roses. The upper cornice has a cavetto, or concave, frieze carved with acanthus foliage above a guilloche moulding. Each of the upper cupboard units contains three adjustable shelves. The glass panes in the doors are original. The bun feet are later replacements.

A pair of library bookcases originally made for William Blathwayt, Secretary of War 1683-1704, for the library at Dryham Park, the pair to this bookcase is in the V&A collection; museum no. W.12:1 to 11-1927. This is one of the earliest type of domestic free standing bookcase to survive and is very similar to those ordered by Samuel Pepys from 'Sympson, the Joyner' in 1666 for the library of his London House (now at Magdalene College, Cambridge). The design, with its strong architectural features, is geometrically based and the glazing was inspired by the sash window which was introduced in England and Holland about this time. 'Thomas (?) Sympson the Joyner' (fl. 1660 - c.1700) was a joiner (and perhaps cabinet maker) who worked at the Royal Naval Docks ard at Woolwich in London. He is remembered only because Samuel Pepys mentions his name several times in his diary. Blathwayt acquired the Dyrham estate through his marriage in 1686 to the heiress Mary Wynter. In the 1690s he rebuilt west and east fronts, to designs by the architects Samuel Hauduroy and William Talman. The fine woodwork was supplied by London joiners. Thomas Hunter, of the Angel, Piccadilly, who made the sash windows, may have supplied these bookcases. A copy of the bookcase was made by Mallett and Son, The Octagon, Bath, to replace the one purchased by the Victoria and Albert Museum and supplied to Dyrham in June 1927. See: Lenygon, Francis. 'Furniture in England 1660 - 1760', p. 152, fig. 235. TIPPING, H. Avray. 'English Homes', Country Life. Period IV, Vol. I, p. 360.