'El Espolio' (The Disrobing of Christ) 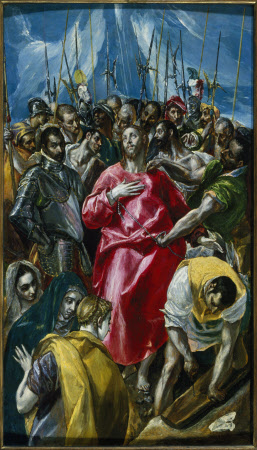 Oil painting on pine panel, 'El Espolio' (The Disrobing of Christ) by El Greco (Kríti 1541 - Toledo province 1614), signed in two lines on the cartellino (paper) bottom right (mostly effaced): Δ…ΟΣ ΘΕΟΤ…ΥΝΟΣ (Domenikos Theoto [copoulos] Cretan made), 1577/78. Christ stands on Calvary in the centre of a group of soldiers, one of whom reaches for His robe; in the right foreground an executioner bends over the cross which lies on the ground and pierces holes for the nails; he is watched by the three Marys (Mary Cleophas, the Virgin and Mary Magdalen) standing at the left in distress. The scene relates to a part of the Passion in the Gospel of St Matthew (xxvii 27-28): 'Then the soldiers of the governor took Jesus into the common hall, and gathered unto him the whole band of soldiers. And they stripped him, and put on him a scarlet robe.' The title comes from the Latin verb 'spoliare' (in Spanish: espolio). The present picture is a reduced version of El Greco's famous image of the disrobing of Christ produced as an altarpiece for the sacristy of Toledo Cathedral (commissioned by the Cathedral's Dean, Diego de Castilla, in 1577 and completed in 1579).