The Dormition of the Virgin 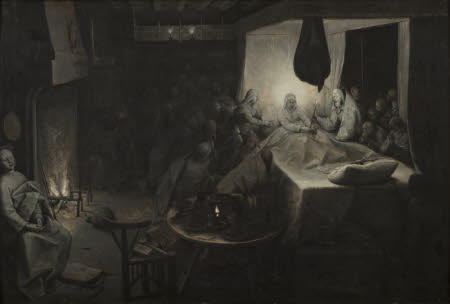 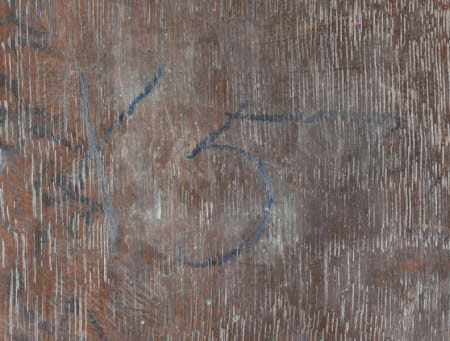 This 'grisaille', or grey monochrome painting, shows the death of the Virgin, attended by the Apostles and other figures. In earlier versions of this subject, mourners had always been limited to the apostolic number of twelve. The subject has been developed by Bruegel into a natural or domestic event, to which numerous men and women are admitted. The picture once belonged to the famous geographer, Abraham Ortelius (1527-98). It was owned later by Rubens and is, in all probability, the Bruegel listed in the inventory taken after Rubens's death in 1641.

Oil painting on oak panel, The Dormition of the Virgin by Pieter Bruegel the Elder (Breda or Bruegel c. 1525 - Brussels 1569), c. 1564, signed in brown pigment, lower right corner of the chest in front of the Virgin’s bed: BRVEGEL. The Virgin Mary, sitting up in bed in a darkened room, receives a lit candle from an elderly man, Saint Peter, who stands right, wearing a chasuble, amongst a group of kneeling Disciples. Mary Magdalene arranges the Virgin's pillows whilst the Virgin looks at a Crucifix propped up on a pillow at the foot of the bed, a kneeling monk ringing a bell beside. Across the room, beside a fire and before a messy table covered with plates and cups, a man, possibly Saint John, sleeps upright and open-mouthed in a chair. The room is unevenly lit from four sources; the candle, the torches placed high up on a carved wooded frieze between the bed and the door, a candle on the table and the taper held by Saint Peter. The scene shows the death or 'dormition' (falling asleep into death, without suffering) of the Virgin Mary.

Infrared reflectography revealed a limited amount of underdrawing, which appears to have been applied with brushes, and several compositional changes: the woman plumping the Virgin’s pillow was drawn to our right of the painted figure and her right arm was drawn and reserved lower; the cat’s rump was drawn and reserved slightly to the right of the painted animal; in the curtain behind the Virgin, underdrawn lines may perhaps show Bruegel conceiving a smaller bed seen in a different perspective; and the bed curtains behind St Peter were thus painted in slightly different positions and were differently lit. Tolnay writes that the inspiration for the composition is derived from a miniature, La Mort, in the Grimani Breviary, painted by Simon Bening and his workshop between 1505 and 1510 (repd. by Tolnay, pl. 153 and Gibson, pl.94). Schongauer’s influential engraving of the Death of the Virgin (see impression in British Museum, London, inv.no. 1868,0822.153) may also have proved a source for the group of Apostles around the bed. Grisailles are extremely rare amongst Bruegel’s oeuvre, although another, of Christ and the Woman taken in Adultery, can be found in The Courtauld Gallery, London(inv.no. L1275).