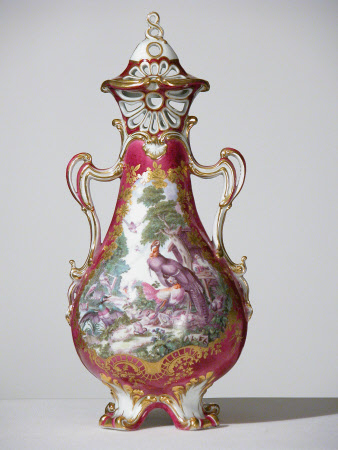 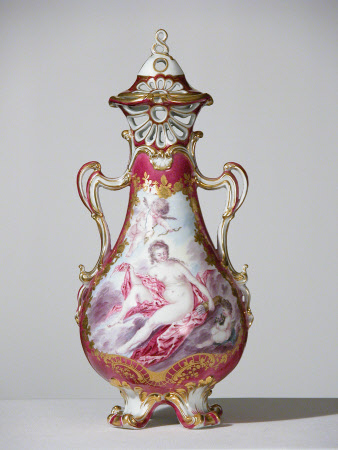 One of a garniture of seven pot-pourri vases, Chelsea Gold Anchor c.1767. The porcelain is painted in enamel colours reserved on a claret ground with gilding. The bird painting on the vases is in the manner of M. de Hondecoeter. The vases were lent to the Victoria and Albert museum by Lord Bearsted in 1949, and returned to Upton in 1998. The garniture is said to have been ordered by George III as a present to Lady Cope on her marriage in 1767. During the 19th century they were in the possession of Lord Dudley, hence their title ‘The Dudley Vases’.

Jar and cover from a seven-piece garniture of pot-pourri jars, soft-paste porcelain, pear-shaped on four scroll feet with two pierced scroll-handles, pierced neck and cover, the reserved panels on a crimson(or claret)-coloured ground with foliate tooled gilding are painted in polychrome enamels with Venus among the clouds, holds a quiver of arrows, accompanied by two cupids, one with a bow and arrows and the other a basket of flowers, the reverse with a turkey and other farmyard birds after the Dutch artist Melchior de Hondecoeter (1636-95), maker's mark a gold anchor mark; Chelsea, London, England, circa 1763-4. The figure of Venus is directly based on a French engraving, ‘L’Amour Désarmé’ by Etienne Fessard (1714-77) after François Boucher (1703-70), dedicated to 'Madame de Pompadour, Dame du Palais de La Reine' and published according to the ‘Mercure de France’ in April 1761. However, the detail of Venus playing with Cupid’s arrow is missing, but incorporated into the scene on 446369.3-4. The original painting was commissioned by Louis XV to decorate the ‘appartement des bains’ at the royal Château de Choisy in 1751. There is an example of the engraving is in the Fitzwilliam Museum, Cambridge, acc. no. 34.17-84. The composite depictions of farmyard fowl and pheasants in formal landscapes, including peacocks and turkeys in the 17th-century manner of Melchior de Hondecoeter (1636-95) or Francis Barlow (1626-1704), ‘Multae et diversae avium species’, London, 1650-55, were possibly also based on engravings by Joseph Sympson (1710-50) after paintings by Marmaduke Craddock (c.1660-1716), published in 1741-3. (Ferguson, 2014) Provenance: 'Said to have been for George III as a present to Lady Cope on her marriage in 1767 and subsequently in the possession of Lord Dudley, hence their title “The Dudley Vases”'.