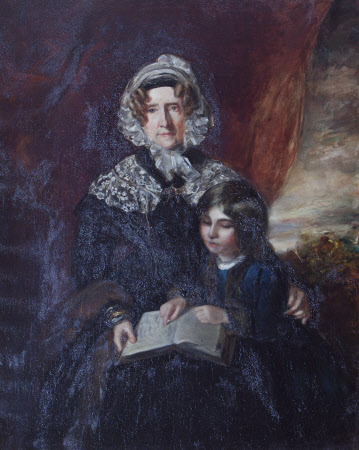 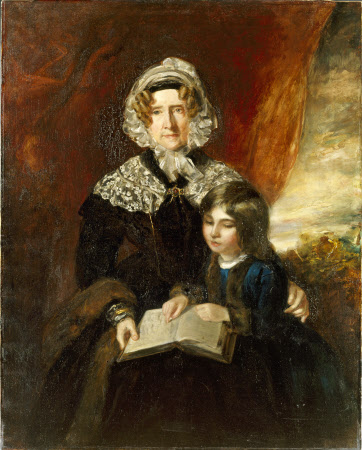 Oil painting on canvas, Frances Bankes, Lady Brownlow (1756–1847) and her Great-Grandson John William Spencer Brownlow Egerton Cust, later 2nd Earl Brownlow (1842-1867) by James Rannie Swinton (Kimmergehame 1816 - London 1888), 1846. A three-quarter-length portrait of the wife of Sir Brownlow Cust (1744-1807) at the age of 90, dressed in a black dress, white collar and cap. She is depicted with a child and holding an open book. She was the daughter of Sir Henry Bankes (1711-1774), an alderman and merchant of London and Frances Pembrooke. She married in 1775, as his second wife, Sir Brownlow Cust, 1st Baron Brownlow of Belton (1744-1807) and brought with her a dowry of £100,000, and a collection of her father's pictures. She also bore him eleven children. John William Spencer Brownlow Egerton-Cust was the son of John Hume Egerton, Viscount Alford and Lady Marianne Margaret Compton. His original name was John William Spencer Brownlow Cust. John William Spencer, 3rd Baron and 2nd Earl Brownlow (1842-67) was the eldest son of John Hume (Egerton-Cust), Viscount Alford (1812-51), and Lady Marian Compton (1817-88), daughter of the 2nd Marquess of Northampton; succeeded his grandfather as Earl Brownlow in 1853. In 1853 he changed his name to John William Spencer Brownlow Egerton and in 1863 he changed his name again to John William Spencer Brownlow Egerton-Cust. He was education at Eton and Christ Church, Oxford. The 2nd Earl was consumptive, and regularly went south with his mother, in search of better health. Her artistic bent may also have encouraged him to become an early practitioner of photography. He and his mother patronised the working-class Christian Socialist poet, Gerald Massey (1838-1907), and provided him with a house, Ward’s Hurst, on the Ashridge Estate. He died unmarried at Mentone, to which he had gone, like so many British, for the sake of his health, in February 1967. Massey wrote a threnody, In Memory of...Earl Brownlow, which was privately printed in 1869. He was succeeded, as 3rd Earl, by his robuster younger brother Adelbert Wellington Brownlow Cust (1844-1921) who married Lady Adelaide Talbot (1844/5-1917).