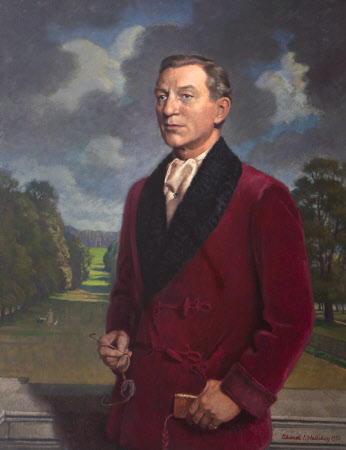 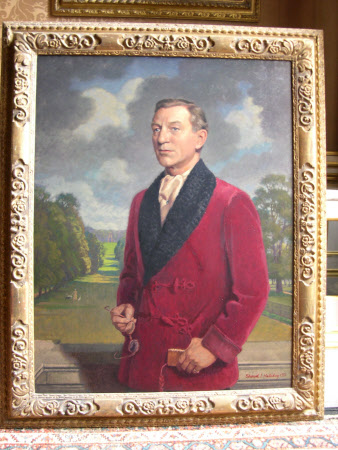 Oil painting on canvas, Peregrine Francis Adelbert Cust, 6th Baron Brownlow of Belton (1899-1978) by Edward Irvine Halliday ARA (Liverpool 1902 – 1984), signed and dated 1956. A three-quarter-length portrait turned to the left, gazing to the left, wearing a red smoking jacket. Shown standing on the roof of Belton House looking towards Belmount Tower. He was the son of Adelbert Salusbury Cockayne Cust (1867-1927), 5th Baron Brownlow of Belton and Maud Buckle (d.1936). He married, firstly, Katherine Hariet Kinloch, daughter of Brig.-Gen. Sir David Alexander Kinloch of Gilmerton, 11th Bt and Elinor Lucy Bromley Davenport, on 18 October 1927, secondly, Dorothy Power, daughter of Thomas Sarsfield Kent Power, on 10 December 1954 and, thirdly, Leila Joan Reynolds, daughter of Major Philip Guy Reynolds, on 14 May 1969. He was educated at Eton and the Royal Military College, Sandhurst. Was a Lieutenant in the Grenadier Guards. He fought in the First World War. He succeeded to the title of 6th Baron Brownlow of Belton on 19 April 1927. He was Deputy Lieutenant of Lincolnshire in 1929, 1936-1950; Mayor of Grantham in 1934; Lord-in-Waiting to HM King Eward VIII in 1936; was a Squadron Leader in the Royal Air Force Volunteer Reserve and fought in the Second World War. He was Parliamentary Private Secretary between 1940 and 1941, to the Minister of Aircraft Production.