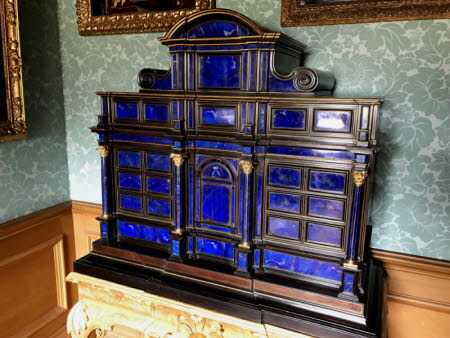 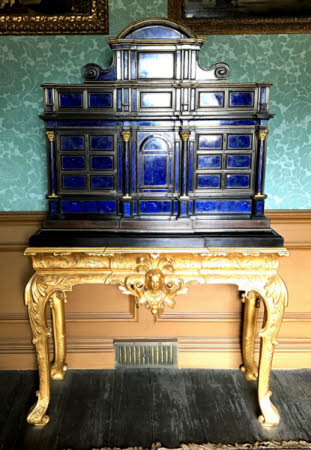 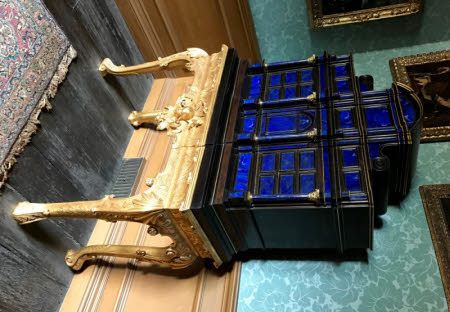 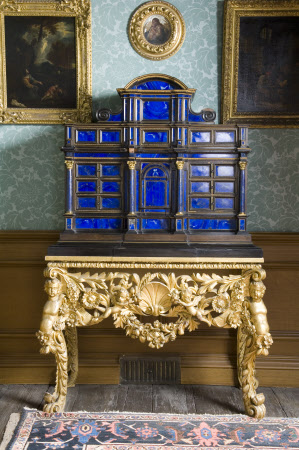 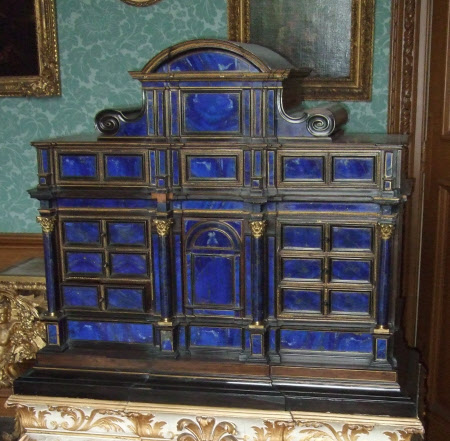 Lapis lazuli, as a decorative material applied to furniture is not unusual, especially on European furniture produced in the 17th century. It is a material prized for its deep ultramarine colour and its exclusivity and was generally only used sparingly to enhance pietra dure (inlaid hardstone) cabinets and other decorative objects. A cabinet of this form, the front almost entirely veneered with panels of lapis is quite extraordinary and possibly unique. Because of its rarity It is difficult to attribute a city of manufacture but the most likely source is Rome, and probably created during the second quarter of the 17th century. It is also likely that the cabinet was purchased by Sir John Brownlow, 5th Bt. later Lord Tyrconnel when he visited Italy on his Grand Tour in 1710-1711. The cabinet is not mentioned in early inventories of Belton which suggests it was sent to Tyrconnel's house in Arlington Street, London where it appears in an inventory of 1738 in the Dining Room 'A very curious blue cabinet of Lapis Lazuli on a wrought gilt frame'. (James Weedon October 2018)

The cabinet probably purchased in Italy by Sir John Brownlow (1690-1754) during his Grand Tour (1710-11).Listed in the Dining Room at Arlington Street, London in the 1738 inventory 'A very curious blue cabinet of Lapis Lazuli on a wrought gilt frame'.Transferred to Belton House post 1738.Sold Christie's Belton House sale 30th April - 2nd May 1984 lot 141 with an associated giltwood stand (now supporting a Japanese casket NT435120) Purchased with a grant from the National Heritage Memorial Fund (NHMF) from Edward John Peregrine Cust, 7th Baron Brownlow (b.1936) in 1984 and returned to the Belton collection.