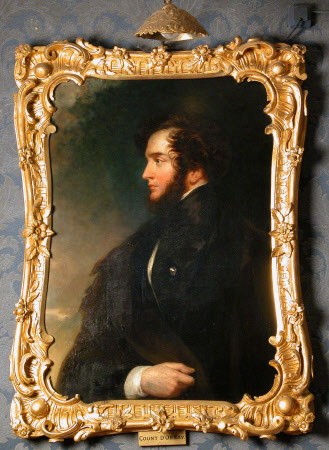 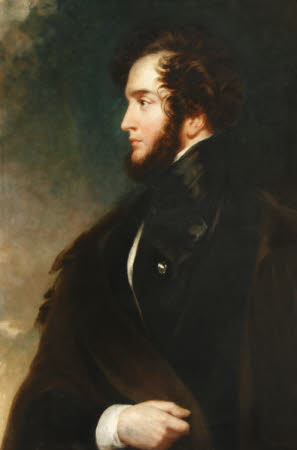 Oil painting on canvas, Alfred Count d'Orsay (1801–1852) by John Wood (London 1801 - London 1870), 1841. A half-length portrait of the left profile of young man with beard. Wearing heavy black cape, right hand holds it closed at waist. Count d'Orsay met Benjamin Disraeli and Edward Bulwer-Lytton at Gore House. He and Disraeli were good friends in the 1830s – to the point that Disraeli asked d'Orsay to be his second, when it appeared that Disraeli would fight a duel with Morgan O'Connell, the son of Irish agitator Daniel O'Connell. D'Orsay declined, on the grounds of being a foreigner, and Disraeli went with Henry Baillie, a mutual friend. The character of Count Alcibiades de Mirabel in Disraeli's novel Henrietta Temple was modelled on d'Orsay, to whom the book was dedicated.

Bought by Disraeli from Count D'Orsay's widow; given to the National Trust with Hughenden Manor by the Disraelian Society, 1947