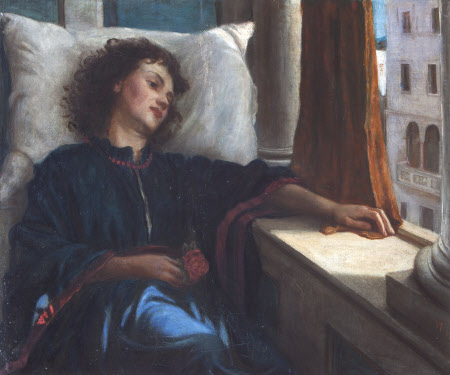 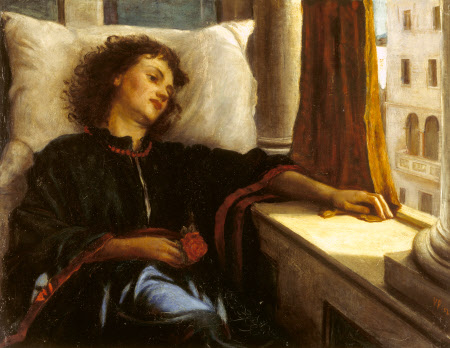 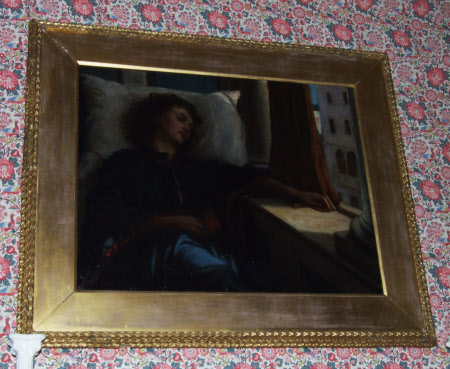 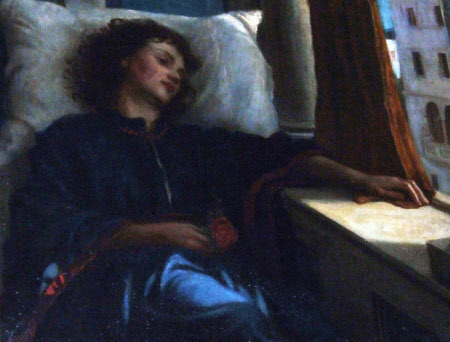 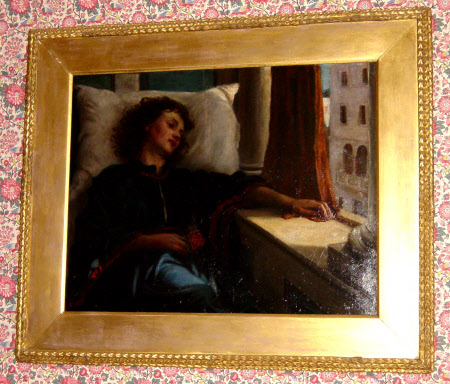 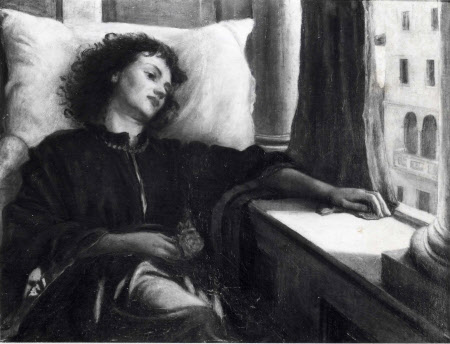 Oil painting on canvas, Lisa (possibly from Bocaccio's ' The Decameròn' IV.5) by Valentine Cameron Prinsep (Calcutta 1838 – London 1904), signed and dated, lower right 1867. Lisabetta da Messina is seated languidly by a curtained window with a white pillow behind her head. Her left arm is resting on a windowsill, and she is holding a rose in her right hand resting on her lap. Outside the window can be seen a four to five storey Florentine palace. She is mourning the departure of her lover, Lorenzo, whom she does not yet know has been killed by her three brothers. The subject is perhaps more famously renderd by Millais' 1849 painting in the Walker Art Gallery, Liverpool and Holman Hunt's Isabella, or the Pot of Basil in the Laing Art Gallery, Newcastle (1866-8 & 1886) where the Pre-Raphaelite artists were inspired by Keat's poem (1818) which was an hommage to Boccaccio. An alternative reading is that the subject is in fact from Pampinea who tells the 7th tale on day 10 where King Pedro, being apprised of the fervent love borne him by Lisa, who thereof is sick, comforts her, and forthwith gives her in marriage to a young gentleman, and having kissed her on the brow, ever after professes himself her knight. A painting entitled: A Venetian lover. "De deux amants il y en a toujours un qui aime et l'autre qui se laisse aimer " (François de La Rochefoucauld) and exhibited at the Royal Academy, 1868 (499) could be a contender. Val Prinsep was born in Calcutta, son of a civil servant, Henry Thoby Prinsep, and Sarah Monckton Pattle, sister of pioneering photographer Julia Margaret Cameron and Maria Jackson, grandmother of Virginia Woolf and Vanessa Bell. He studied under G. F. Watts and met Rossetti, becoming influenced by the Pre-Raphaelites, although his work owes its greatest debt to his friend Leighton. With Rossetti, Morris, Burne-Jones and Hungerford Pollen, he decorated the debating hall of the Oxford Union Society with soon-faded murals illustrating the Morte de'Arthur. In 1884, he married a daughter of F. R. Leyland of Speke Hall (NT).